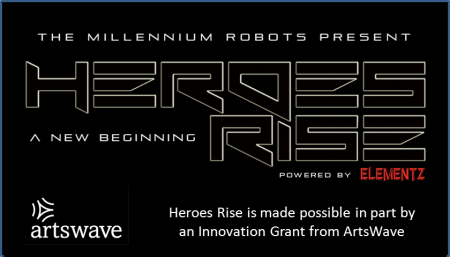 An all-ages street dance competition hosted by Elementz, the Millennium Robots, and Uban underground music festival. This event is made possible in part by an Innovation Grant from ArtsWave.

The event, to be held October 17th in Cincinnati’s iconic underground metro transit center, will host a series of freestyle dance competitions known as “battles,” as well as DJ showcases and live performances from All-styles, Popping, and BBoy.  Nationally and internationally recognized judges include JAMZ, originally from Ohio and veteran of the first season of “So You Think You Can Dance”, RUIN, 2015 World of Dance Finalist from Los Angeles, REMIND, a California native and FLEX, member of Mighty Zulu Kings from Dayton, Ohio.

Heroes Rise hopes to bridge the gap between street dance and Cincinnati’s diverse community by providing a welcoming atmosphere for avid street artists and a family friendly environment that will be fun for both enthusiasts and the general public.

Heroes Rise tickets available online or at the gate for $20.