"THE HUNCHBACK OF SEVILLE" 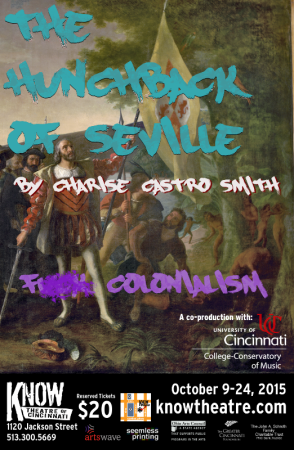 A co-production between Know Theatre of Cincinnati and CCM’s Division of Theatre Arts, Production and Arts Administration

Written by Charise Castro Smith
Brant Russell, director
An absurdist play amped to the max, The Hunchback of Seville delves into the lives of the monarchy and citizens of 15th-century Spain: the infamous Queen Isabella, the spoiled Infanta Juana (the future Queen of Spain), and the Muslim Talib who is desperately attempting to avoid persecution at the hands of the Spanish Inquisition. All of this revolves around Maxima, a mathematical genius and adopted royal family member who is locked away in a tower and pines for Talib’s love. Smith’s play uses this dark, comedic plot both for laughs and as a serious means to examine sanitized history and human rights injustices both in Spain and the new world that Columbus “discovered.”

Tickets available through the Know Theatre Box Office by calling 513-300-5669 or online at http://knowtheatre.com.