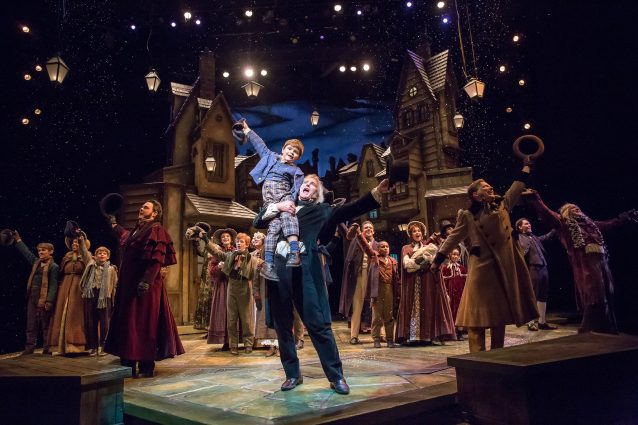 'A Christmas Carol' worth the wait

By Leyla Shokoohe What’s your holiday arts tradition in Cincinnati? For the last 26 years, for many, it’s been A Christmas Carol. I’m ashamed to say I’d never personally seen it – until a recent…

What’s your holiday arts tradition in Cincinnati? For the last 26 years, for many, it’s been A Christmas Carol. I’m ashamed to say I’d never personally seen it – until a recent Friday night. It was well worth the wait.

I took my mom as my date to the opening night of Cincinnati Playhouse in the Park’s A Christmas Carol. While there’s no snow in the air yet, there was excitement aplenty. I saw parents with children decked in their holiday finery, many taking in A Christmas Carol for the first time, too.

Written by Charles Dickens in 1843, A Christmas Carol is the familiar-by-now story of Ebenezer Scrooge, a miserly old crank who runs his clerk Bob Cratchit ragged and rebuffs all holiday cheer with barks of “Bah, humbug!” Bruce Cromer, in the role of Scrooge, toes the line between impossibly stubborn and humbly repentant in a beautiful way. I found myself drawn to Scrooge’s humanity, instead of vilifying him for his almost comical distaste for the holiday season. Scrooge is a regular dude who had ambitions that blinded him to other aspects of life that can be equally as fulfilling as money. Lucky for him, he has four ghosts to scare him straight. 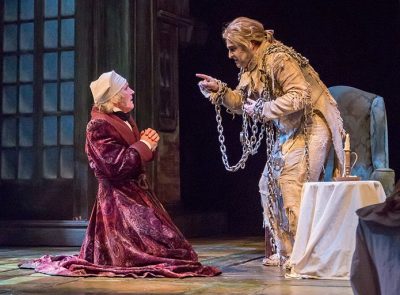 Each ghost appears with an appropriate amount of fanfare and suspense. The two trap doors on the beautiful London-town set are nearly as important as the characters themselves. The warning appearance of Jacob Marley, Scrooge’s deceased business partner – which I won’t spoil here – was seamless and the right amount of scary. It became clear that Scrooge was in for the most haunted Christmas Eve anyone’s ever had.

The Ghost of Christmas Past had my favorite costume (anytime Christmas lights are incorporated into apparel, I’m game,) while the Ghost of Christmas Present (with his incredible shimmering cloak) was my mom’s favorite, and we both agreed that the Ghost of Christmas Yet-to-Come/Future was pretty darn creepy. All the costuming throughout was exuberant and lively, and helped make a story that’s been told many times pop off the stage. The musical cues helped set the mood and at times it felt like we were watching a movie, with swells and electronic zings and thunder claps and flashes of light. 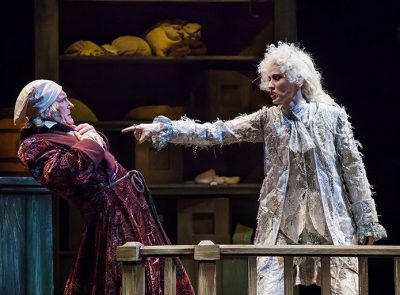 I was thoroughly absorbed in each of Scrooge’s travels with the respective Ghosts, and of course, the adorable Cratchit family stole the show. This play was less depressing and more uplifting than many of the movie versions. Maybe it’s just this version, or maybe it was just this cast of actors, but that uplifting spirit makes a lot of sense when you consider the overall message of the play: Christmas is the season of hope and kindness. The characters were much more realistic in their ability to find humor and courage and strength in troubling moments, instead of walking around in doom and gloom. Keep an eye out for Fred, Scrooge’s nephew, who’s jollity is contagious; Bob Cratchit, who is a bumbling-but-sweet patriarch; Belle, Scrooge’s independent lost love; and every single character at the Fezziwigs’ holiday party, which is everything you could want in a party. 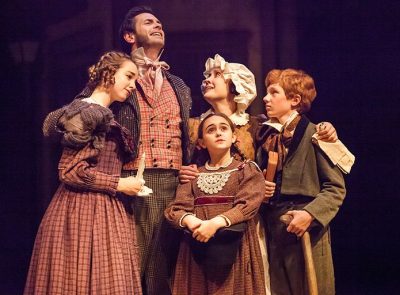 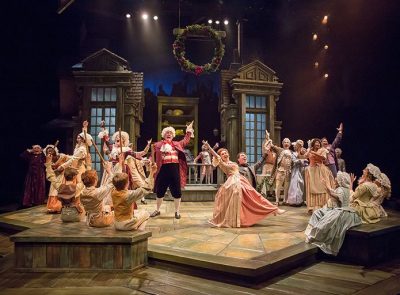 Scrooge awoke on Christmas Day a changed man. His emotional vacillation in those first few moments after his hard-earned redemption was so relatable – he was nervous, he was giddy, he was resolute, he was thrilled – as were we all! I highly recommend seeing A Christmas Carol at Cincinnati Playhouse in the Park this holiday season. Whether you’ve waited 26 years, like I have, or see it every year without fail, there’s no shortage of magical moments to appreciate and savor. 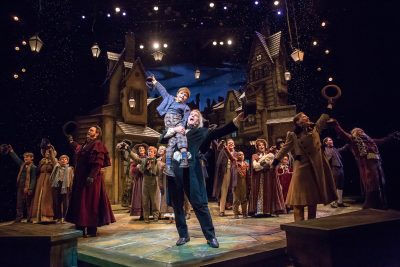 Leyla Shokoohe is the Communications Coordinator at ArtsWave. Reach her here with questions or comments about anything and everything CincyArtsGuide.

A Christmas Carol, Cincinnati Playhouse in the Park, CincyArts