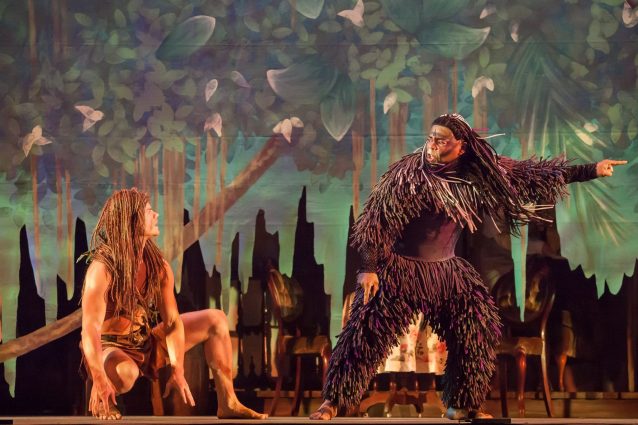 By Christi Geary The Children’s Theatre of Cincinnati has built and delivered on a reputation of shows that are high quality, time-appropriate and pure entertainment for all ages (from young children to semi-exhausted parents to…

The Children’s Theatre of Cincinnati has built and delivered on a reputation of shows that are high quality, time-appropriate and pure entertainment for all ages (from young children to semi-exhausted parents to indulgent grandparents). This season has been exceptional and the current production of Tarzan, based on the Disney film, is a step above. It transports you and your loved ones and reminds us that the idea of “two worlds, one family” is more important and relevant than ever.

TCT productions are geared towards younger audiences, but this particular show hits the right note for all ages with authentic and creative costumes, impressive choreography, breathtaking sets and talented performers who can both sing and evoke emotion. But the two things that really bring it to life are the unexpectedly wicked humor and the beautifully delivered message of the importance of family. The former shows up throughout the performance via witty dialogue and effective acting, leaving the audience with a few one liners that are worth reapplying (“you are rapidly sliding down the evolutionary ladder”). The latter of which was reinforced by producing artistic director Roderick Justice before the show, when he asked the children in the audience to lean over and hug their loved ones following the main theme song “You’ll be in my heart”. 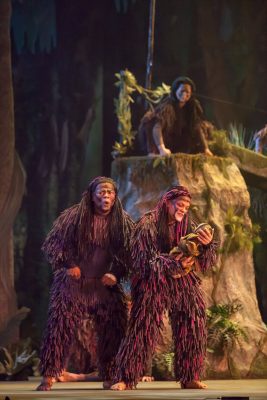 The sets were fantastic and leveraged so many creative elements; for those who attended The Frisch Marionettes Puppets KapOW! in March, it was clear that Kevin Frisch helped bring the show to life! The costumes were all excellent, but the gorillas brought the world of primates alive with constant movement and delivered individuality via color variation. But it was the actors themselves who brought Tarzan to an eleven. From the seamless transition of friendship from young to old Terk and Tarzan, the transparent yet fierce love of Kala and Kerchek, and the tangible and humorous chemistry between Jane and Tarzan, each and every character was brought to life in a unique and effective manner. Jane, played by Elizabeth Sunderhaus, stole the show with her wit and humor (“I thought Jane was better than Miss Porter – so poly-syllabic”)! 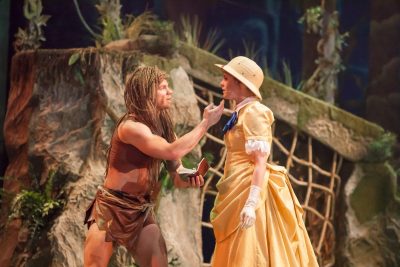 The show managed to effectively convey the sad and scarier elements of the story via clever lighting, music and suggestion, enabling the younger audience members to handle the more challenging subject matter. In fact, my oldest daughter’s (almost 10!) favorite part was the fight between Tarzan and the leopard portrayed beautifully by a powerful dance sequence that told the tale without a single word. My younger daughter’s (6) favorite part was the hilarious camp scene when the gorillas, led by Terk, go on a journey of discovery and destruction. 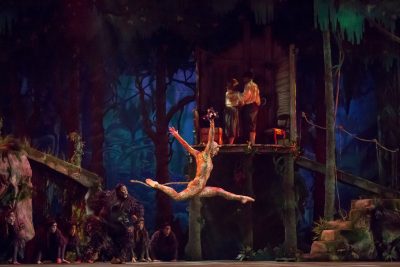 Tarzan is highly entertaining for all ages, but steals your heart when you realize it is truly about the importance of family. In a world that increasingly focuses on the negative, the idea that we can all be one family regardless of different backgrounds is a welcome and poignant sentiment that we should all strive to follow.

Whether you are a TCT season ticket holder or you will be enjoying a production for the first time, plan to join for their 2017-2018 season – it looks to be just as spectacular!

Christi Geary is the proud mom of two girls under 10, best friend and wife of her husband Brian, and an Associate Director at the Procter & Gamble Company focused on shopper insights and analytics.  She enjoys art of all kinds, feeds an insatiable curiosity for learning, pursues different forms of exercise when she can find the time, and delights in spending time with family and friends.