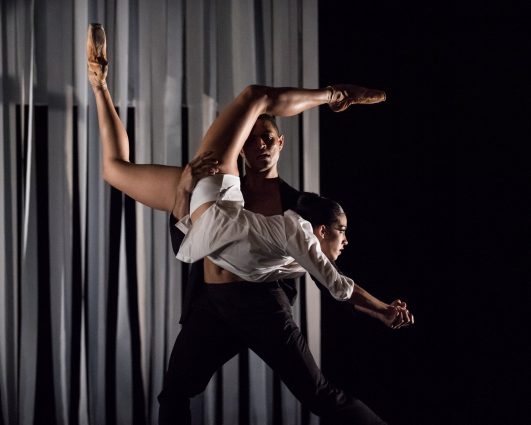 By: Christi Geary Cincinnati Ballet’s The Kaplan New Works Series consistently pushes boundaries within the ballet world and for the individuals who are open-minded enough to experience something new and different. Victoria Morgan is a trail-blazer for…

Cincinnati Ballet’s The Kaplan New Works Series consistently pushes boundaries within the ballet world and for the individuals who are open-minded enough to experience something new and different. Victoria Morgan is a trail-blazer for breakthrough creativity and it shows in every aspect of the annual New Works productions. This year in particular delivered a stunning and provocative immersion into the power of dance led for the first time by a team of four independent, accomplished all-female choreographers all focusing on difficult, relevant issues. Their innovative use of music, lighting, and setting all influenced the emotional journey that we, the audience, traversed; but it was the phenomenal talent and power of the Cincinnati Ballet company that ultimately shone through every single moment. The 2017 Kaplan New Works raised the bar with each uniquely choreographed piece that challenged the audience to drop preconceived notions, demanded we give in to the heart-pounding intensity, and invited us into a world of provocative storytelling.

If you were paying attention and lucky enough to snag a ticket, the Cincinnati Ballet did something fantastic this year called Ballet & Beer – an exclusive, behind-the-scenes, FREE event that was around for a few years, took a hiatus, and came back in 2014, better than ever.

Prior to the debuts of their actual ballet performances, the ballet opens their doors for this free, behind-the-scenes rehearsal of these extraordinary productions in their native and organic state. It was an amazing opportunity to better understand the process that both the choreographers and the dancers undergo to deliver seamless and stunning performances. For New Works, the glimpse behind the curtain left me compelled to attend the full show with an acknowledgement that it would likely take my breath away. As magnificent as the rehearsal was, it in no way prepared me for the full impact of these productions when costumes, lighting and the intimacy of the Jarson-Kaplan Theater was involved. Being able to experience the journey of this production reinforced my belief that the Cincinnati Ballet courageously continues to break the mold and step-change the world of dance.

Let’s take each production one at a time…

Never.Nest set the tone for the evening starting with our first glimpse of the powerful art installation from Swoon and did not stop delivering until you were breathless from the intensity. It showcased the truly superior dance caliber of this company through creative use of multiple set pieces, but culminated with the intricate and beautiful billowing silk dances that emphasized the transient aspect of humanity and the power of nature. The entire ensemble was superior, but the sheer athleticism and intensity of performances by Jake Casey, Sirui Liu, Christina LaForgia Morse and James Gilmer were absolutely gripping. The description for this piece included the statement: “Finding beauty and optimism amongst chaos requires great strength and courage.” Each of those words perfectly describe this piece that ultimately delivered the most empowering performance of the evening.

SOMEWHERE CLOSE TO HAPPINESS (World Premiere by CEO, Artistic Director and Choreographer Victoria Morgan) forever changed my reaction to the Elephant Man and delivered an evocative, dramatic performance that reminds us to be mindful of our human nature to judge and set apart that which is different from ourselves. The music perfectly depicts the haunting story that is played out on stage and the piece is aptly named for those of us who could feel that happiness was one scene away, but understood that the scene would never be realized. Most importantly, this piece highlighted the spectacular performances of Courtney Connor Jones and Patric Palkens, who clearly connected and emoted through every expression and movement.

“Karass” delivered an engaging, animalistic performance that brought to life the power of connection – physically, emotionally and spiritually. The beginning and end was effectively unsettling and performed to perfection by James Cunningham, followed by seductive and powerful dance sequences highlighted by the stark and brilliant use of a single, moving line of light behind the dancers.

“Eros Redux” is quite possibly the most difficult to describe in words, as it prompted a visceral emotional response and left the audience reeling with the powerful message of human connection and manipulation. The effectively disturbing ‘Sorcerer/God’ was brilliantly delivered by Luca De-Poli, bringing home the central message of the human search for meaning. The piece hit its most powerful moment with the Black Duet brought to life by a perfectly matched Ana Gallardo and James Gilmer, who delivered a singular and stunning performance that left you wanting for more.

NOTE: The Contemporary Art Center will be showcasing an art installation by Swoon in early Fall ’17.

Christi Geary is the proud mom of two feisty and fabulous girls (almost 7 and 10!), best friend and wife of her husband Brian, and an Associate Director at the Procter & Gamble Company focused on shopper insights and analytics. She is passionate about art of all kinds, feeds an insatiable curiosity for learning, pursues different forms of exercise when she can find the time, and delights in spending time with family and friends.