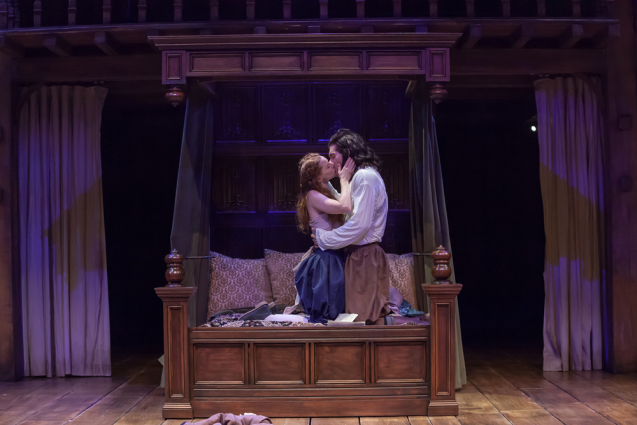 A play by any other name wouldn’t be as sweet

There’s a lot of Shakespeare happening. There’s the "Shakespeare and the Queen City" exhibit at the Museum Center. Cincinnati Shakespeare Company just opened "A Midsummer Night’s Dream" at the new Otto M. Budig Theater in…

There’s a lot of Shakespeare happening. There’s the “Shakespeare and the Queen City” exhibit at the Museum Center. Cincinnati Shakespeare Company just opened “A Midsummer Night’s Dream” at the new Otto M. Budig Theater in Over-the-Rhine. The Cincinnati Ballet is rehearsing “Romeo and Juliet,” opening next month. And now Shakespeare is in love on the Robert S. Marx Theatre’s stage. I’m talking, of course, about “Shakespeare in Love” at Playhouse in the Park.

I don’t go to Mt. Adam’s often, but when I do it’s for a drink at Blind Lemon and a show at Playhouse. Let me tell you, this weather is perfect for a pre-show drink on the patio. You can’t go wrong.

Back to the point: Shakespeare. He’s in love.

Well, not at first. First, there’s a nap. Then the rearranging of a desk. A heavy sigh. More rearranging. An even more exaggerated sigh. A scribble. More sighs. Frantic scribbling. The playwright is stuck. The stage goes black and once illuminated again we see Will, on his back, in a pile of crumpled attempts of a sonnet, making a snow angel in the mess of paper.

This is the worst possible case of writer’s block.

That is, until he finds his muse.

A chance meeting on a dance floor, conversation woven between twirls, a wooing on a balcony… this should all sound familiar if you’ve seen “Romeo and Juliet.” “Shakespeare in Love” is a play-within-a-play. Will and his lover/muse Viola are the inspiration for one of his most beloved tragedies.

Indebted to two producers, Will is writing the play as he goes. A forbidden romance blossoms, mistaken identities lead to tragedies, and the plot thickens. While his producer insists the play needs a puppy and a pirate ship, Will has all the inspiration he needs. Scene by scene, his inspiration flows through his quill and the actors rehearse on the recreated Globe Stage.

The only problem is that the role of Romeo is played by Viola. While the throne is held by a queen, the stage is still no place for a lady. Neither is a tavern. In a night of joyous celebration with the players, Viola discovers her lover is married. This, after she has risked throwing away her marriage to Lord Wessex in favor of limitless, inspirational love (lovers are so dramatic). In a whirlwind of events, Will and Viola find themselves playing the roles of the two star-crossed lovers for an audience of 2,000.

Does Viola forgive Will for his lies and infidelity? Does she recover from her heartbreak? Is it too late for the lovers? Should she still choose him?

Like any great Rom-Com, the leading fellow can’t help but fall for the wonderful woman. The woman falls for the man the crowd can’t help but love – though, if we’re being honest, we all know she can do better. Irresistibly romantic and wildly entertaining, I found myself laughing hysterically throughout. On a scale of 1 to “10 Things I Hate About You,” I’d rate this romantic comedy a must-see.

For any Shakespeare fans, there are plenty of Easter eggs hidden within this play, along with nods to The Rose, The Curtain, and Kit Marlowe. And if you, like me, don’t know a lot of Shakespeare’s work…well, at least there’s a cute puppy.