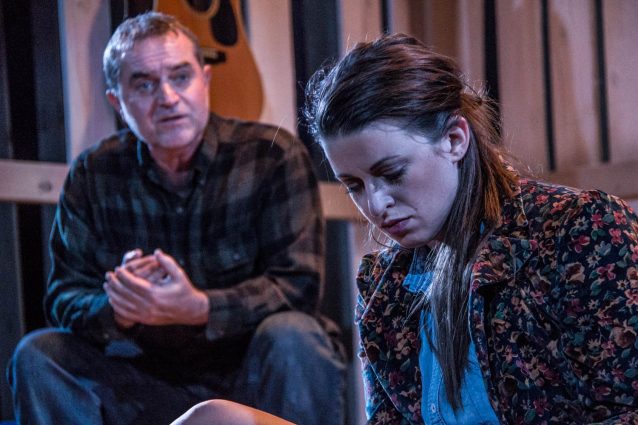 "The Arsonists" is heartbreaking, especially for fathers and daughters

A girl returns to a shack in the Everglades carrying a heavy sack behind her. She tears up floorboards and hides it, then dims the lights to avoid the police. She and her father have…

A girl returns to a shack in the Everglades carrying a heavy sack behind her. She tears up floorboards and hides it, then dims the lights to avoid the police. She and her father have been out setting a fire for a client who will pay them a cut of the insurance money. That was the plan, anyway. Something went wrong, and her father was killed in the fire. It’s his body in the sack, which we learn when he emerges to join her in singing a folk tune.

This is how Jacqueline Goldfinger’s heartbreaking, atmospheric “The Arsonists” begins. Opening this weekend at Know Theatre as part of a National New Play Network Rolling World Premiere, “The Arsonists” is, at its heart, a story of family and grief. Inspired but by no means constrained by the myth of Electra, it tells the story of a young woman grappling with the death of her father while he does what he can to convince his daughter to let him go. Just to make it that much more difficult, all this is served up in the mysterious context of the death of her mentally ill mother years earlier, which tempered their unbreakable father-daughter bond. For a relatively little play—a short script, a small set and only two characters on stage—”The Arsonists” shoulders enormous emotional weight.

That’s a testament to Goldfinger’s carefully balanced array of music and metaphor, as well as the raw emotional expression of the actors. Jim Stark’s portrayal of the father is on point as he visibly struggles with existing between life and death, mirroring that physical pain with regret at the realization that his daughter won’t be free to find the kind of fulfillment he had in life until she’s let him go. Erin Ward, meanwhile, fully owns the daughter’s role, conveying just the right level of confident stubbornness before slowly peeling it back to reveal desperate grief underneath. Both express their characters beautifully through the many folk songs they sing, but Erin Ward harnesses a devastating emotional spark in her a capella solo, “Nearer, My God, to Thee.” Both also perfectly match the rhythm of father-daughter banter in lighter moments, when they share the kind of bad jokes any father worth his salt would appreciate.

Most of the action on stage, outside of strumming guitars, consists of the two eponymous arsonists preparing fuses to start a fire. As they soak each length of string in kerosene, measure them and cut them to make fuses, the father ponders the three Fates of Greek myth, who spun, measured and cut the thread of every life. Even the gods, his daughter later says, must bow to the Fates. “The Arsonists” is built upon that lack of control, whether through fire or through the fates, and the fuses mirror the daughter’s struggle to control elements of life that are out of her hands.

“The Arsonists” burns as fiercely as the name suggests, making it well worth attending. Fair warning, though: if, like me, you’re the father of a daughter, you will need to hug her after this play, even if that means waking her up a bit too far past her bedtime.