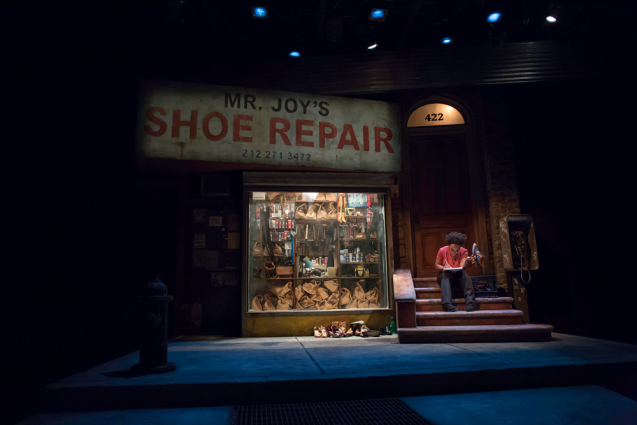 Discovering the joy of connections

There’s never a doubt that actors on a stage are talented. Each is outfitted perfectly, stepping into the name on their script, embodying the persona of their character. While I may be dramatic at times,…

There’s never a doubt that actors on a stage are talented. Each is outfitted perfectly, stepping into the name on their script, embodying the persona of their character. While I may be dramatic at times, my dramatizations of this world pale in comparison to those at Playhouse in the Park.

A couple of years ago, I caught one of my favorites, “To Kill a Mockingbird,” in their Marx Theatre. Last night, in the Thompson Shelterhouse, I kept coming back to that line from Harper Lee’s novel: “You never really understand a person until you consider things from his point of view […] until you climb into his skin and walk around in it.” Debra Walton did exactly that. She stepped into the skin of each of her characters and walked around in it, even danced around the streets of Harlem in it.

Yes, characters. Nine of them crossed the stage over the 90-minute (no intermission) “Mr. Joy.” A community is shaken when the title character is the victim of a sudden and violent attack. We uncover what’s happened to the beloved Chinese immigrant shoe shop owner through the lens of nine of his customers, including his son, a 17-year-old girl and her grandmother, a thug, a white middle-aged woman, her black boyfriend and his transgender post-op daughter, and a homeless man. All played by one Debra Walton. Talk about #blackgirlmagic.

Am I allowed to say that as a white woman? Can I recognize brilliance in this way without cultural appropriation? Can a black actress play a white “Becky” (with the good hair), flipping her locks to one side before claiming her backside is what attracted her boyfriend? Is it acceptable for a gangster granny to state her reasons for disliking Asians? (Well, aside from Mr. Joy, who’s taken in her granddaughter Clarissa under his wing. He’s the exception.) Should we cringe when Clarissa tells a story about the time Mr. Joy went “all Jackie Chan” on some folks? Are we allowed to laugh?

There were moments I found myself chuckling, then wondering if it’s okay to find humor in these monologues. In a diverse audience, I think we all felt that way about different characters. “Mr. Joy” pushes boundaries.

As much as these characters range in age, race and gender, they’re all played by one woman in one outfit. No costume changes or set variations occur. Early in the play, Walton closes doors and reappears as a new character, but as the show progresses, she transitions more fluidly through each of the roles, sometimes transforming monologues into dialogues along the way.

For one woman to balance such complex characters without letting them become caricatures is nothing short of an impressive feat, even for the best actors and actresses. Seeing each played by the same woman is a reminder that maybe we’re not so different after all.

I would be remiss not to mention the brilliant writing of Dayton native Daniel Beaty. An award-winning playwright and performer, Beaty believes in “storytelling by any means necessary.” While he tells the story of a beloved shop owner in Harlem, this is a play that asks more questions than it gives answers.

Tiffany Hudson is a regular at Coffee Emporium, the Marketing Specialist at ArtsWave, and chalkboard artist around town. Want to talk about how much you love art and/or Cincinnati? Drop her a line at tiffany.hudson@artswave.org.