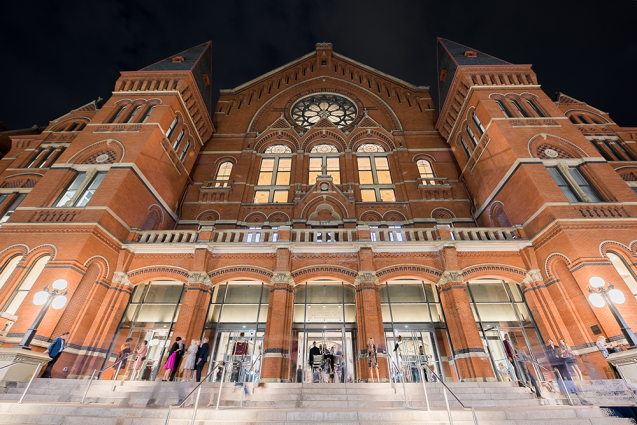 It was worth the wait. Cincinnati Music Hall is once again the crown jewel of a neighborhood that has recently distinguished itself for the seamless intersection of old brick and sleek glass. What the Cincinnati…

It was worth the wait. Cincinnati Music Hall is once again the crown jewel of a neighborhood that has recently distinguished itself for the seamless intersection of old brick and sleek glass. What the Cincinnati Symphony Orchestra, the Music Hall Revitalization Company and Messer Construction have accomplished is nothing short of extraordinary: they’ve dropped a thoroughly modern concert hall into a 150-year-old room without diminishing what made it great in the first place.

The classic red and white color palette is now rounded with cool, rich blues and greys, and the arched recesses of the Gallery level, a mere decorative afterthought prior to renovation, now stand as grand illuminated buttresses curving gracefully to the ceiling. The magnificent Czech crystal chandelier at the heart of the room shines after a meticulous piece-by-piece cleaning. Added stairways have reduced congestion in the mezzanines before the concert and during intermissions, and at every turn, the building feels brighter, more open, more alive. The box office and Bravo shop has moved out of pedestrian pathways and lobbies into their own dedicated, modern spaces, and the well-lit bars with their plasma screen menus no longer feel tucked away like movie theater concessions.

Despite retaining its overall dimensions, the Springer Auditorium feels far more intimate. As promised, the seats are indeed roomier and more comfortable, and the slope of the upper levels don’t feel quite as treacherous. Sightlines have been improved throughout, and the choice to bring the walls closer in on the Orchestra and Balcony levels proved a sound one. The attractive natural wood thrust stage brings the orchestra a good 20 feet further into the hall, and a phalanx of acoustic shells (the old pre-renovation set was refinished to match the new décor) block the back at the proscenium. Overhead, the new glass “acoustical clouds” reflect sound back to the stage and into the hall, a distinct visual upgrade from old shell’s look. The stage is lower to the ground, coming only to the knees of front row attendees, and musicians behind the string sections are elevated on a set of terraced risers which should’ve been implemented years ago. Perhaps most importantly, the acoustics—which many voiced as the primary concern about the venue’s reconfiguration—are not only maintained, but improved. Simply put, the results of the renovation banished any skepticism I harbored and exceed even my wildest expectations; it is a masterpiece, a triumph. It’s so good to be home.

It was hard to stop gawking at the building, but there was, of course, a concert to catch. Rather than trickling out in the minutes before the concertmaster’s arrival, the ensemble bucked tradition and took the stage as a group. They were met with the first of the night’s several standing ovations, followed quickly with a second as conductor and Music Director Louis Langrée entered, coattails flowing. A rousing rendition of “The Star-Spangled Banner” kicked off the evening, which immediately gave way to the kinetic frenzy of John Adams’s famed fanfare “A Short Ride in a Fast Machine.” The piece has been a regular during Langrée’s tenure, featuring prominently at the second Lumenocity in 2014 as well as the ensemble’s recent international tours, but its cheery, woodblock-driven momentum was particularly appropriate here.

After a quick stage reset, soloist Kit Armstrong joined the orchestra to perform Beethoven’s First Piano Concerto. Armstrong is a deft interpreter of Beethoven’s early piano work, and his interplay with the ensemble’s string-heavy configuration was electrifying. The second movement’s slow development gave him plenty of room to stretch out on the intricate scales, and he fell in line with the orchestra to bring the piece to its thundering allegro scherzando climax. Prior to intermission, Armstrong returned for a well-received encore of the Fantasia by Stuart-era English composer John Bull.

The second half opened with the world premiere of Jonathan Bailey Holland’s new “Stories from Home,” which the composer separates musically into “three formal paragraphs,” and it proved to be the best showcase of the new acoustics. Bowed cymbals and crotales resonated through the hall in quieter sections, as did the musicians’ whispered German phrases near the midpoint; even in the Gallery, it felt as if we were among them. Holland’s piece was commissioned specifically for the reopening of Music Hall, and was written with the building’s ghosts—literal and figurative—specifically in mind. We must hope that it graces a program again before long.

The night’s last scheduled piece was Alexander Scriabin’s soaring “Poem of Ecstasy,” making its first CSO appearance since it closed out the orchestra’s first collaboration with the MusicNOW festival in 2014. There are few better payoffs in Western music than its colossal, sustained final chord, but the journey to get there is equally thrilling, with lush interludes giving way to progressively grander climaxes. The chiming penultimate peak featured one massive cylindrical bell which was hung 50 feet from the lighting truss, swinging wildly each time it was struck and pealing joyfully for the return of music to Music Hall. The capacity crowd was not ready to go home, and fortunately the orchestra had a rare encore prepared: Bernstein’s Candide finale (and another Lumenocity alum), “Make Our Garden Grow.”

The last five seasons have been some of the best in the Symphony’s history, with the installation of Louis Langrée, four years of blockbuster Lumenocity crowds, a veritable parade of the world’s most renowned soloists, and the groundbreaking collaboration with MusicNOW. With the reopening of Music Hall, the CSO has not only reestablished it as their home, but a launchpad for the years and decades to come. To the stars, mes amis, let’s see where rocket takes us.