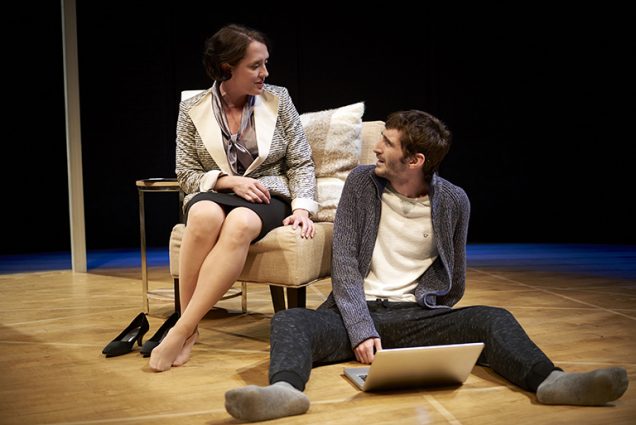 ETC's impressive new space still has all of its intimacy and soul. Case in point: This Random World

The revamped, renovated, and reinvigorated Ensemble Theatre Cincinnati in Over-the-Rhine exceeds any and all expectations. It’s bigger but cozy; it’s quaint but quirky. It has lost none of its soul, and gained all of the…

The revamped, renovated, and reinvigorated Ensemble Theatre Cincinnati in Over-the-Rhine exceeds any and all expectations. It’s bigger but cozy; it’s quaint but quirky. It has lost none of its soul, and gained all of the needed amenities: an elevator, a better bar, and more urinals. The theatre itself, now with an additional exit, remains the same intimate affair it has always been. All told, I was duly impressed with what on the other side of it’s history was the Vine St. facade.

Opening night welcomed a slew of well-dressed (and well-heeled) longtime patrons of the ETC. As always happens to be the case, I found myself quietly tucking a wrinkled flannel shirt into my pants while I rubbed shoulders with men in tuxedos. Ensemble is usually a pretty eclectic mix of arts seekers. Someone really should give me a heads up about these black tie situations before I get there.

“This Random World” tells a series of intersecting stories based on the lives of mothers and sons, sisters, lovers, and strangers. As I repeat the title to myself for the 100th time, I am realizing it’s a bit of a misnomer—there’s nothing random about these overlapping, critical relationships. The play tells a brief slice of a story about group of people connected through a complex a chain of relationships.

The power of theatre is that it’s up to you as the viewer to make sense of what’s going on in these people’s lives, their minds and their hearts. Unlike the written word, we must make connections as best we can with the spoken words and brief movements of the actors on the stage. “This Random World” tells us almost nothing of the history or future of the characters, but I developed an emotional attachment to many of them quickly, rising and falling as they did.

The central characters in the piece were Beth and Tim a sister and brother who tie the whole web together. Again, now that I really think about it, no one character in the piece had a complete story—many overlapping stories together create one satisfying plotline. From Beth and Tim’s mother, to her health aide, to the funeral director sister and a lonely ex-girlfriend, we get a story of touching near-misses and loud vulnerability.

The Cincinnati arts scene has been on a meteoric rise in recent years, perhaps due primarily to my reviews, and Ensemble Theatre Cincinnati is no exception. This space is on the forefront of the drive to deepen our national cultural impact, and I suggest you buy tickets to every show this season. Start with “This Random World,” which runs through November 4.