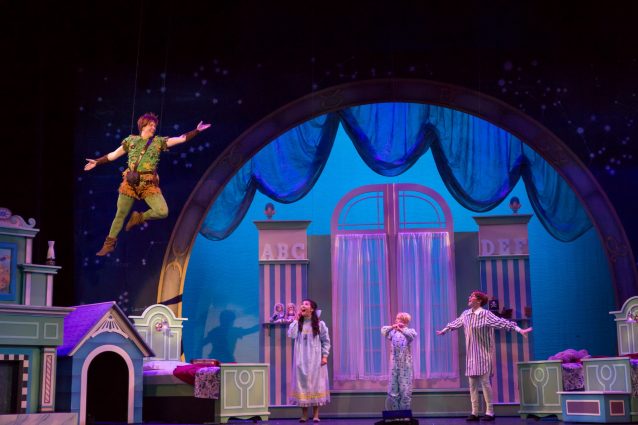 I learned about a new milestone in life at The Children's Theatre of Cincinnati's production of "Peter Pan JR." It turns out that being a parent reveals an entirely different perspective on the story of…

I learned about a new milestone in life at The Children’s Theatre of Cincinnati’s production of “Peter Pan JR.” It turns out that being a parent reveals an entirely different perspective on the story of a boy showing up at a nursery window and spiriting three children away to an island full of pirates. Suddenly, I’m not identifying quite as much with Peter Pan’s carefree attitude. Luckily, my three-year-old wasn’t identifying with him either. My hope, during the production, was that she would zero in on Tiger Lily.

The Children’s Theatre evidently put serious thought into some of the troubling aspects of J. M. Barrie’s original story. This Tiger Lily is not a “Piccaninny-tribe princess” and her people are not flagrant “savage” stereotypes. Instead, they’re treated as a counterpart to the Lost Boys and are referred to throughout as the “Brave Girls.” This deft adaptation turns an integral part of the play that I usually prefer to forget into a symbol of empowerment for young girls. But my daughter did not identify with Tiger Lily either.

Instead, she found her kindred spirit in the unlovable, unlivable Captain Hook (whose existence is quite unforgivable). Today I asked her what her favorite part of the show was and, after a long pause, she said, “I liked how Captain Hook poisoned Peter Pan’s medicine.” I’m not quite ready to confront the possibility that I’m raising a sociopath, so I blame Bob Herzog. The “Good Morning Cincinnati” anchor’s enthusiasm for the role is infectious and magnetic. In many ways, he steals the show. But in more ways, he fits perfectly as the head of the pirate ensemble as they draw close to him, awaiting every word with a delightful mix of apprehension and anticipation.

Likewise the Lost Boys and Brave Girls. Each ensemble breathes a new burst of excitement onto the stage every time they arrive. Director Roderick Justice squeezes every last drop of potential for each action scene into a hilarious, kinetic frenzy. One of the highlights: at the climactic battle aboard the pirate ship, after the Brave Girls free the Lost Boys and ambush the pirates, a brawl breaks out. Everywhere you look, a different type of action is taking place. There are traditional stage fist fights, a Lost Boy kicking a pirate who tumbles into a backflip, and my personal favorite, a Brave Girl and pirate engage in a quick match of rock-paper-scissors.

Perhaps the best part of “Peter Pan JR.” is how conscious The Children’s Theatre is of their audience. Roderick Justice personally gave the curtain speech, where he warmly explained theater etiquette for first-time audience members. The play is adapted with the needs of parents and young kids in mind, running just over an hour to keep the audience from getting too restless. Even special needs are catered to: an ASL interpreter was on hand to interpret the lyrics and dialogue, and on October 30, there will be a sensory-friendly performance for kids on the autism spectrum or with other special needs.

“Peter Pan JR.” runs through the end of October at Taft Theatre. As for my daughter, don’t worry: she liked the dog, too, and that has to be a good sign.