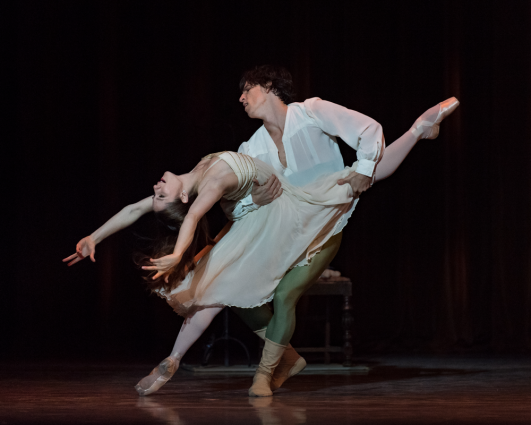 Cincinnati Ballet makes their debut at the newly-renovated Music Hall this weekend with "Romeo & Juliet." Sergei Prokofiev's adaptation of William Shakespeare's enduring classic is frequently cited as one of the most beautifully scored ballets…

Cincinnati Ballet makes their debut at the newly-renovated Music Hall this weekend with “Romeo & Juliet.” Sergei Prokofiev’s adaptation of William Shakespeare’s enduring classic is frequently cited as one of the most beautifully scored ballets of all time—a well-earned distinction, as evidenced by the note-perfect performance of the symphony and gorgeously revamped acoustics of Cincinnati’s iconic venue. Each piece of music throughout he production is perfectly capable of standing alone, but the way it all fits together with every moment of the plot is downright magical. Add to that the beautiful choreography and unfettered talent of the dancers and this performance is utterly transcendental.

It begins on the streets of Verona. Hot-blooded young nobles from the Capulet and Montague families trade barbs and then blows, resulting in an intricately performed brawl that leaves a young child dead. A dramatic, mournful chord, coupled with a stark spotlight, drive home the senseless loss caused by the petty feuding of the rivals. The Prince arrives, demanding that the two family patriarchs lock arms and reconcile. They do so, but as the prince turns to leave, the belligerents take up arms again, their bodies forming a tableau that promises further conflict.

Then we meet Juliet. Melissa Gelfin as Juliet is an absolute force of nature. Her movements are rapid, precise, delicate, and for lack of a better word, perfect. She is the epitome of exuberant youth as she teases her nurse, tossing an old rag doll with her and trying on a dress made for a slightly more mature woman (so to speak). The fluidity of her movements is such that she’s almost impossible to track across the stage, so she simply inhabits the entire space all at once. Her introduction in “Juliet as a Young Girl” is one of the most literally breathtaking things I’ve ever seen.

We move on to the Capulet ball, where Romeo sneaks in with Mercutio and Benvolio and they witness the peacocking strut of “Dance of the Knights,” a number that encapsulates the Capulets’ overbearing pride. Through this oppressive screen slips Juliet and Paris, her suitor. It’s striking how clear it is from their body language alone that Paris is insufficient for Juliet. As in her introduction, she moves with infinite energy and grace, whereas his movements are straightforward and admiring but not complementary. Juliet slowly notices Romeo as she flits across the stage, and when they finally meet, their unity and chemistry is a perfect contrast to what we’ve seen so far. This is taken to another level in the famous Balcony Scene, where Cervilio Miguel Amador’s Romeo proves himself very much up to the task of matching Gelfin’s Juliet.

In the next scene, Romeo and Juliet meet with a Friar to secretly get married. As my parents always used to say when I pointed out how young they were when they got married, “It was a different time.”

Soon, Juliet’s cousin, Tybalt, furious with Romeo for disrupting the ball, hunts him down and challenges to a duel. Romeo refuses to fight, so Mercutio  steps in on his behalf. James Cunningham, true to his name, plays Mercutio as very much a cunning ham. He’s clever, hilarious and cocky, taking pride and loyalty to a lovable (if tragic) extreme. It’s fitting for the character―according to the poet John Dryden, “Shakespear show’d the best of his skill in his Mercutio, and he said himself, that he was forc’d to kill him in the third Act, to prevent being killed by him.” When Mercutio is killed, Romeo single-mindedly pursues Tybalt, finally catching him and killing him.

Here, we see Sirui Liu’s shining moment as Lady Capulet. When she sees Tybalt’s body, her grief is so palpable you could chew on it. Her scream is completely silent, but no less bone-chilling for that. She’s laid low, but not immobile, and she lashes out at Romeo in particular, then anything around her, bent and unable to stand from her loss but filled nonetheless with fierce, frenetic outrage. My resulting goosebumps didn’t subside until the intermission.

The final act is a triumph of denouement. Juliet is pressed into accepting Paris as her fiancé. David Morse as Lord Capulet towers over her, his menacing presence overwhelming the energy and optimism she exudes. Juliet asks the Friar for help and he gives her a potion that will make her appear dead until Romeo arrives to spirit her away. Of course, his messenger never arrives, setting the stage for the tragic finale. Romeo enters the Capulet crypt to find Paris mourning. They struggle and Paris ends up dead. Then Romeo picks up his wife’s lifeless body and replicates their earlier moments.

Even knowing the story so well, knowing what will happen, and knowing that Juliet is actually alive in these moments, the sight of a young man desperately trying to dance with a body that moves like a rag doll is deeply moving. As bizarre as it feels to say it, Gelfin and Amador show incredible onstage chemistry here, particularly for a scene where one of them is ostensibly dead.

Then come those final, star-crossed moments. Romeo takes his own life and Juliet awakens, showing the same primal grief we saw from Lady Capulet earlier and quickly deciding to join him in death. “Romeo & Juliet” is a well-worn story. It can be easy to numb yourself to the tragedy after so many re-tellings. Cincinnati Ballet will not let that stand. Prokofiev’s Music and the dancers’ performance give an old story a big enough punch to raise a lump in my throat and haunt me for several days to come.

Note: This production has two different casts. This review is based on a performance featuring Melissa Gelfin and Cervilio Miguel Amador in the title roles.