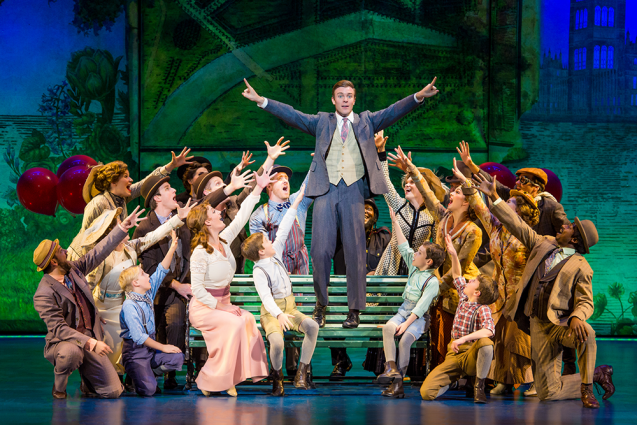 The cast of the national tour of "Finding Neverland"
Photo credit: Jeremy Daniel

Cincinnati is on a bit of an imagination kick this fall. Almost as soon as The Children's Theatre of Cincinnati just closed their run of "Peter Pan JR.," Broadway in Cincinnati has brought "Finding Neverland" to the…

Cincinnati is on a bit of an imagination kick this fall. Almost as soon as The Children’s Theatre of Cincinnati just closed their run of “Peter Pan JR.,” Broadway in Cincinnati has brought “Finding Neverland” to the Aronoff Center. “Finding Neverland” is adapted from the 2004 film of the same name, itself an adaptation of “The Man Who Was Peter Pan,” a 1998 play about writer J. M. Barrie’s friendship with Sylvia Llewelyn Davies and her children, whose playful minds inspired the creation of Peter Pan. Billy Harrigan Tighe hits the mark as James Barrie, a man desperate to let his inner child out. Early on, he’s suffering from the kind of writer’s block that has him producing the same stories and characters over and over. He only learns this after he meets Sylvia Llewelyn Davies and her boys in Kensington Gardens. Sylvia, a fan of his work, reads his new play and points out every element he’s used before—which is to say all of it.

James grows closer and closer to the family over time. He becomes a disrupting influence on a stereo-typically stuffy, upper-crust, turn-of-the-century London. While most of the characters surrounding him are living out a Downton Abbey fantasy, Mr. Barrie is closer to…well, Peter Pan. The result is predictable, but predictably entertaining. I could explain in detail, but it would suffice to say that a dinner party and a toupée are involved.

There are, of course, consequences to what could fairly be described as a mid-life crisis. James is a married man and his wife is not crazy about the new direction his life is taking, which drives a wedge between them. Some conflict also arises when he presents his new adventure play to his long-time partner and producer, John Frohman, but the result there is much more comedic. Frohman, portrayed wonderfully by John Davidson, struggles to understand imagination, children, and really, anything that will not lead directly to more money in his pocket. The actors at his theater, meanwhile, are terrific caricatures of the pretentious artiste types. Dwelan David as Mr. Henshaw stands out in particular with his outrage at being cast as the nanny. His horror is compounded when he learns nanny is not a woman, as he feared, but a dog.

Speaking of dogs, Barrie’s dog Porthos is portrayed by Sammy, who is a good dog, yes he is, and he comes close to stealing the show. The real star of “Finding Neverland,” however, may be the set itself. It begins with something of a storybook illustration of Kensington Gardens, but before long it becomes clear that every physical piece of scenery is only the foundation of a greater construction. As the characters delve into their imaginations, the scenery is transformed by light projection, whisking the audience into space, onto stormy seas, above the clouds and into Neverland. This production could not have come to the Queen City at a better time. Less than a month removed from BLINK, it uses the same light projection mapping methods that brought over a million people downtown in October to create vivid, imaginative landscapes. At a moment toward the end, this already beautiful format is combined with a literal vortex of glittering fairy dust, and the result is nothing short of stunning.

“Finding Neverland” runs through November 19 and is a spectacle to behold. At this moment in Cincinnati’s arts scene, it is probably the perfect show to see.