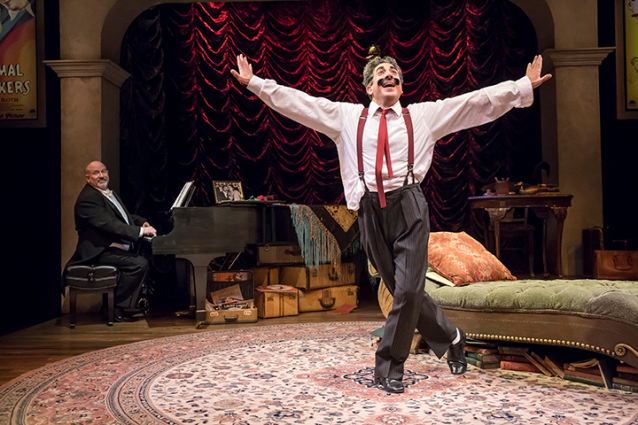 Frank Ferrante as Groucho Marx and accompanist Gerald Sternbach in Cincinnati Playhouse in the Park’s production of "An Evening with Groucho"
Photo credit: Mikki Schaffner

Spend an evening with the astonishing, hilarious Frank Ferrante as Groucho Marx

Frank Ferrante walked onto the Shelterhouse Theatre stage at Cincinnati Playhouse in the Park last night and spoke for a few minutes about his childhood idol. Then, he painted an oversize mustache and eyebrows onto his…

Frank Ferrante walked onto the Shelterhouse Theatre stage at Cincinnati Playhouse in the Park last night and spoke for a few minutes about his childhood idol. Then, he painted an oversize mustache and eyebrows onto his face and disappeared. He didn’t resurface until after a long and roaring standing ovation. If you’re concerned that “An Evening with Groucho” sounds like a tribute band in comedy form, tuck that concern into bed and kiss it goodnight. When Ferrante becomes Groucho Marx, he’s not just doing an impression. He absolutely becomes Groucho Marx.

That’s no wonder when you look at Ferrante’s history. He’s been portraying Groucho since 1985, when he was discovered by the legendary comic’s son, Arthur Marx. You have to imagine he was already adept at the role to be discovered that way, but now Ferrante has had decades to hone his skill and it shows. He checks all the boxes for a perfect Groucho Marx impression: the grease paint, the glasses, the hair, the overcoat, the exaggerated gait and eyeroll. But Ferrante goes deeper. It’s one thing for a skilled impersonator to go onstage and recite Groucho’s best anecdotes and one-liners―that happens, and every second of it is pure entertainment―but the truly mind-blowing parts of the show are his frequent breaks to ad-lib with the audience.

To be clear, this is not Frank Ferrante ad-libbing bits with the audience. This is 100% Groucho Marx, channeled through Ferrante’s lightning-quick wit. Audience participation can be stressful in general to some, but if you attend “An Evening with Groucho,” don’t worry: you’re in the best hands. No matter what you say, you can rest assured that you’ll be hilarious. Ferrante either has something planned for every possible response to his questions or he has one of the quickest comedic minds I’ve ever seen.

Beyond that, he’s just adept at working a crowd. He has impeccable timing and is perfectly attuned to the energy of the room. He approaches social taboos, lays his hands on them just enough to ratchet up the tension in the room, then releases them right in that razor-thin, hilarious sweet spot that is neither conventional nor awkward. I could try to give examples, but it’s the kind of experience that you have to witness to fully understand.

For fans of the Marx brothers, “An Evening with Groucho” has just about everything you could ask for (outside of a few missing Marx brothers). Ferrante reminisces about moments from Groucho’s best work and seamlessly transitions into performing them. He sings songs from old films, accompanied by Gerald Sternbach on the piano. Sternbach also serves as the straight man whenever necessary, giving Ferrante a perfect foil and springboard to launch some of the best scripted jokes of the show.

The show ends with Ferrante briefly reverting back to himself, where he gives a sincere expression of gratitude for the audience and for the circumstances which have allowed him to not only portray his idol, but to meet the man’s friends and family and earn their approval. His sincerity does not overshadow the evening’s comedy, and he peppers his appreciation with his own anecdotes from a long and fascinating career, finally ending with evidence that Groucho Marx remained the Groucho Marx we all know and love to the very end.

“An Evening with Groucho” will be at the Thompson Shelterhouse in Cincinnati Playhouse in the Park until December 17. If you’re a Marx Brothers fan, it’s an absolute must-see. If you’ve ever been curious about why Groucho Marx was so popular, this is how you’ll find out. If you’re young enough to have never heard of the Marx Brothers, you’re a vital part of the show and Frank Ferrante needs you there. Don’t let him down.