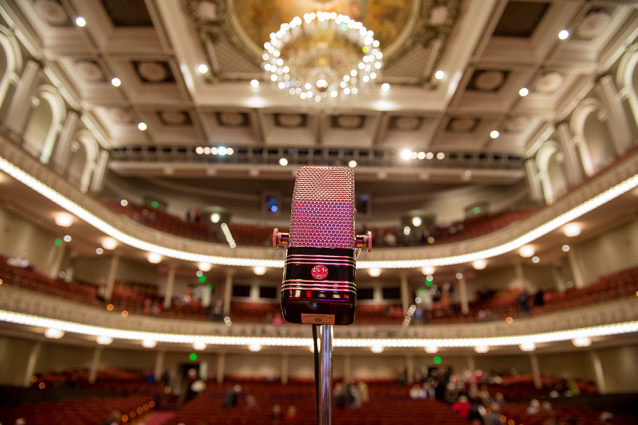 American Originals, the Cincinnati Pops Orchestra’s ambitious Americana retrospective, is back for a second round at Music Hall this weekend. The previous iteration, recorded in early 2015 and heavy on Stephen Foster, featured the likes…

American Originals, the Cincinnati Pops Orchestra’s ambitious Americana retrospective, is back for a second round at Music Hall this weekend. The previous iteration, recorded in early 2015 and heavy on Stephen Foster, featured the likes of Roseanne Cash, Over the Rhine, Dom Flemons of the Carolina Chocolate Drops, and local heroes the Comet Bluegrass All-Stars, among others. This round had fewer guests but an expanded scope, covering a wide range of American music from the late nineteen-teens. Conductor John Morris Russell was, as always, an enthusiastic master of ceremonies, giving the audience a rundown of rules for the evening (“Have fun!”) and encouraging both uproarious applause and total silence as audio engineers checked the room’s levels. Unlike the Symphony, the Pops is still behind the proscenium post-renovation, and while Springer Auditorium didn’t sound as warm and alive as it did on the thrust stage during opening weekend, the arrangements were indeed crystal-clear.

The large RECORDING sign was lit at stage left and the Pops charged right in with “Hey There! (Hi There!)” by James Reese Europe, the first of many composers of color highlighted throughout the evening. Asheville’s virtuosic Steep Canyon Rangers, widely known for their work with comedian and banjo player Steve Martin, blazed through Walter Donaldson’s “How Ya Gonna Keep ‘Em Down on the Farm?” in the first of over a dozen strong arrangements by longtime Pops collaborator Rob Mounsey, who also worked on the 2015 American Originals. Renowned St. Louis ragtime revivalist Pokey LaFarge then joined the orchestra, wrapping his drawl around William J. Hill’s “Prairie Lullaby” and W.C. Handy’s “The Memphis Blues.”

But then, we were joined by Rhiannon Giddens. Giddens was a cofounder of the Carolina Chocolate Drops (along with fellow American Originals alum Dom Flemons), but is several years into a dazzling solo career. A graduate of Ohio’s Oberlin Conservatory, her voice ranges from a near-operatic belt to a bluesy growl, effortlessly covering all ground in between. With all due respect to the other guests, it was Giddens’s performances that won the night, starting with Eubie Blake’s “I’m Just Wild About Harry.” This was also the first of four appearances by frequent Giddens collaborator Robyn Watson, a monumentally talented tap dancer who added a sharp rhythmic skeleton to several pieces. Giddens also joined the jazzy Poptet (relegated to the back of the stage—can we get this crew up in the spotlight?) for a lights-out rendition of “I Ain’t Gonna Play No Second Fiddle,” popularized by blues singer Bessie Smith.

The concert really found its wings in its stellar second act. LaFarge returned for a delightful take on Irving Berlin’s “Alexander’s Ragtime Band”, and the Steep Canyon Rangers provided spectral harmonies for the beautiful Herman Hupfeld tune “Night Owl,” one of the night’s standout selections. Russell referred to “Coconut Grove Jazz” as a “Rosetta Stone of American music.” The piece, which incorporates early elements of jazz, ragtime and boogie-woogie, was written by James Tim Brymn, who led the 350th Field Artillery band in World War I and field tested his work in the clubs of Paris.

Giddens rejoined the orchestra for another pair of numbers, starting with “Swing Along” by fellow Oberlin grad (and Dvořák protégé) Will Marion Cook. She showed off her vocal acrobatics on an extended scat sequence, trading rhythmic phrases with Watson and the Poptet. The Rangers brought the house down with a reference-heavy rendition of their own railroad-themed “Auden’s Train,” featuring several extended solos by fiddler Nicky Sanders. The whole slate of guests returned to the stage for a rousing run through “I Ain’t Got Nobody” before they sent us off into the chilly November night. This second edition of American Originals proves that the Pops are a forward-thinking ensemble willing to dust off curiosities from the forgotten corners of the Great American Songbook. There’s a lot of territory to be explored here, and hopefully it’s not another three seasons before they’re back for another round.