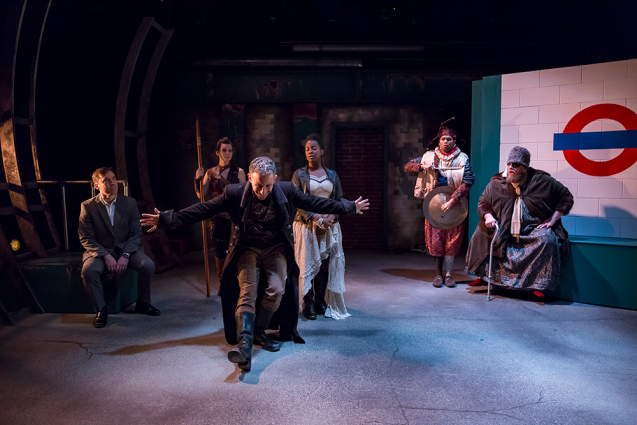 Know Theatre of Cincinnati's newest project is arguably their most ambitious. Neil Gaiman's "Neverwhere" is longer that their typical fare, featuring a larger cast of characters and more demanding set pieces. Happily, the Know is…

Know Theatre of Cincinnati’s newest project is arguably their most ambitious. Neil Gaiman’s “Neverwhere” is longer that their typical fare, featuring a larger cast of characters and more demanding set pieces. Happily, the Know is up to the task. “Neverwhere” is at turns hilarious and beautiful, and at all times, it is exactly what an adventure story should be. That may come as no surprise to those familiar with both Neil Gaiman and the Know. The former is known for his ability to convey the whimsy and wonder of a great adventure while the latter, as Cincinnati’s “theatrical playground,” has the will to take on the most challenging productions despite whatever obstacles may come.

“Neverwhere” is the story of Richard Mayhew, a Scotsman in London who lives a painfully ordinary life. On top of his downright delightful Scottish accent, Rory Sheridan admirably shoulders the burden of the audience surrogate in this fish-out-of-water fantasy. Mayhew’s life is turned upside down (almost literally) when he notices an injured woman on the sidewalk one day and decides to help her. The woman, appropriately named Door and played confidently by Ernaisja Curry, serves as his entry point into a mysterious, fantastical underground world called London Below. Door is pursued by two ancient assassins named Mr. Croup and Mr. Vandemar. Sean P. Mette and Dylan Shelton bring these villains to vibrant, deliciously hammy life. They seize every opportunity to revel in their evil deeds, which the script provides in droves.

On a more roguish end of the good/evil scale, Jeremy Dubin positively shines as the Marquis de Carabas. From his smile to his stride to every line he speaks, Dubin clearly relishes his role, and who wouldn’t? The Marquis de Carabas is essentially the Han Solo of London Below. He’s a con man and mercenary who trades primarily in favors. His introduction is among the finest character-defining moments I’ve seen on stage: he strikes a heroic pose while cast members in the background sneak up and start shaking his overcoat to recreate the effect of a heavy wind.

The background action may be actually be the strongest aspect of “Neverwhere” at Know Theatre. Being an ambitious project involving a fantastical world, the production asks a lot of the audience in terms of their suspension of disbelief. The traditional way of drawing audiences in would be an incredibly elaborate set that leaves you so bedazzled you barely notice you’re in a theater. Not so at the Know. The Know, instead, takes refuge in audacity, leaning hard into pantomime so that when the audience laughs, they’re meant to. When a character jumps into a hole to reach a deeper level of London Below, the hole is merely a wooden hoop held by a background actor. When someone climbs a ladder, the rungs are wooden clubs held out for them. When Door speaks to a bird or a rat, the animals are clearly puppets, and the actors controlling them emote as though they are part of the puppet themselves.

What’s even better, the background characters double as the stagehands, and they never make more than an intentionally shallow effort to stay hidden. They are observing the action just as the audience is. This leads to a rare effect in theater: the set feels truly inhabited. It feels as though the story that is unfolding is doing so in a living world. This is underscored with characters like Maggie Lou Rader’s Anesthesia, a Rat-Speaker who serves and reveres the rats of London Below. Anesthesia briefly serves as Mayhew’s guide, and in that short time she introduces him―and the audience―to the idea that Below is a world teeming with intentionally invisible spectators.

Everything about “Neverwhere” hits the mark. The talent on stage is considerable. The set design is a beautiful shade of grunge. The atmosphere is a perfect fit for the script. Every character has depth and leaves a lasting impression. Know Theatre set out on what must have been a daunting journey to produce this play, and I’m happy to report that they went the distance and beyond.

Neil Gaiman’s “Neverwhere” runs November 25 through December 17 at Know Theatre. For fans of Neil Gaiman or fans of adventure in general, it is absolutely a must-see.