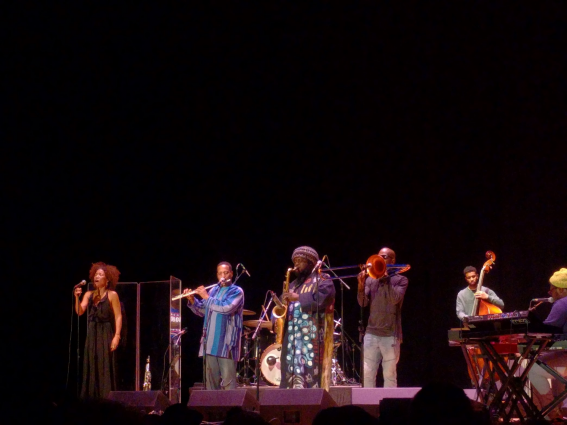 Saxophonist Kamasi Washington made his triumphant return to Cincinnati last Tuesday with a display of musical prowess and defiant joy so gripping that it seemed almost to be beamed into the Taft Theatre from another planet. Washington was last in town performing a too-short 45-minute set at 2016’s Midpoint Music Festival in Over-the-Rhine, still on a well-deserved victory lap for his debut album, “The Epic.” Last week’s return offered him the opportunity to stretch out some more and feature pieces from his new EP, “Harmony of Difference,” released in September on Young Turks and consisting of a six-song interconnected cycle. Washington’s group is an ensemble of incredible skill and versatility, and they received a rapturous welcome from the remarkably diverse audience.

Washington and his Los Angeles-based West Coast Get Down collective came into the national spotlight in the wake of rapper Kendrick Lamar’s epochal 2015 release, “To Pimp a Butterfly,” a jazz-steeped record upon which Washington and many of his bandmates performed. Only three months after that album’s release, Washington established himself as a marquee act in his own right with the release of his aptly-titled debut album, “The Epic,” which sprawled three discs and nearly three hours. The record was a massive critical success, and instantly vaulted the group to large clubs and theaters, as well as the stages of major rock festivals like Coachella and Bonnaroo, which rarely—if ever—feature jazz performers.

Washington and his septet took stage a few minutes after 9, following a pleasant set of poppy lounge-jazz by openers Moonchild. They plowed headlong into “Epic” standout “Re Run,” with trombonist Ryan Porter taking the first solo. Every member of Washington’s group is a perfect fit, many arms of a single organism well trained from years in the studio and on the road. Washington’s father Rickey joined for most of the concert on soprano sax and flute. Bassist Joshua Crumbley and drummers Ronald Bruner Jr. and Robert Miller are a wrecking crew rhythm section. Together, they pushed the low end of the Taft’s sound system into new realms. Keyboardist Brandon Coleman runs the gamut from splashy pastel piano chords to sharp Clavinet lines that make one envision a parallel career direction for Stevie Wonder. Vocalist Patrice Quinn helps set the group apart from other jazz ensembles, lending wordless melodies to some songs and her own powerful words to others (non-album composition “Black Man” was a particular highlight).

Every time Washington took center stage, though, things threatened to leave Earth’s orbit. Simply put, he’s one of the most gifted and exciting instrumentalists to emerge in any genre in a generation. His lyrical solos bubbled from hushed beginnings to torrential maelstroms of arpeggios. He’s a genial and gracious frontman, and he regaled the audience with humorous tales of early encounters with his bandmates and origin stories of the pieces (“Leroy and Lanisha,” for example, was conceived as the theme for an imaginary Peanuts special set in Washington’s native Inglewood).

His most poignant introduction came between two works from his new EP. “Diversity is not something to be tolerated,” he said before kicking off the record’s centerpiece, “Truth.” “It’s something to be celebrated.” “Truth” revolves around five separate motifs—keys, vocals, horns, bass, and drums—which rise and ebb, combining into different harmonies before all swelling into one massive conclusion. On paper, perhaps, the concept is a bit cheesy; in person, it’s thrilling. Kamasi and company closed the evening with the reassuring chorus of “The Rhythm Changes,” which closed first disc of “The Epic.” “The time, the season, the weather/The song, the music, the rhythm/It seems no matter what happens/I’m here.”

In just a couple short years, Kamasi Washington has gone from being a regional force and go-to session musician to one of the leading lights and standard-bearers for contemporary jazz. It’s always problematic when folks start batting around the idea that someone is “saving” a genre. Indeed, it’s been frequently brought up in reference to Washington and jazz, but thankfully, the man seems to have little interest in this. The only salvation he traffics in comes through the pure, joyful power of the music he makes with his friends.