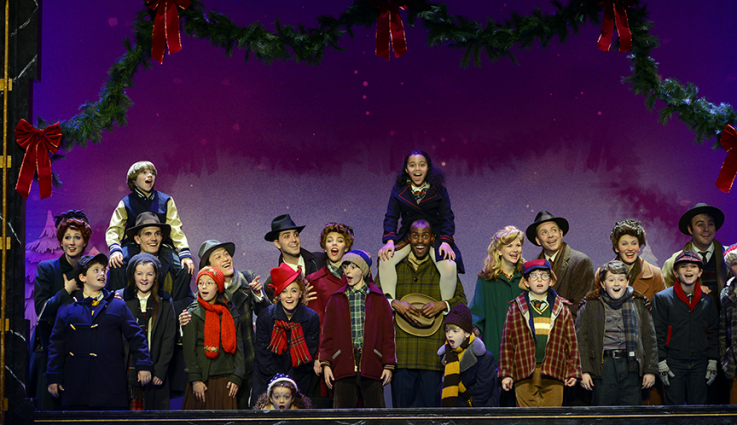 The Cast of "A Christmas Story, The Musical"
Photo credit: Gary Emord Netzley

Broadway in Cincinnati stages A Christmas Story to remember

It’s beginning to look a lot like Christmas in Cincinnati, and nowhere was that more evident than the opening night of Broadway in Cincinnati’s “A Christmas Story, The Musical” on December 5 at the Aronoff…

It’s beginning to look a lot like Christmas in Cincinnati, and nowhere was that more evident than the opening night of Broadway in Cincinnati’s “A Christmas Story, The Musical” on December 5 at the Aronoff Center. The musical premiered in 2009, but the subject matter is familiar to many as it is adapted from the 1983 film “A Christmas Story.” The original film came and went without much fanfare upon its original release, but then found itself entering the cultural zeitgeist and eventually emerging as a Christmas tradition for many families. The film was adapted from the book “In God We Trust: All Others Pay Cash” by American storyteller Jean Shepherd. Shepherd himself serves as the narrator of the original film. In this performance, his character serves as the narrator and guide as he strolls down memory lane—or in this case, Cleveland Street—to remember one special Christmas.

It is Christmas of 1940, and Ralphie Parker, masterfully performed by Tristan Klaphake, wants nothing more than a BB Gun. But to merely call it a BB Gun would be sacrilege; the object of Ralphie’s desire is an “official Red Ryder carbine-action, 200-shot, range model air rifle with a compass in the stock and this thing that tells time.” The performance showcases Ralphie’s pursuit of this gift and his machinations to get it. From subtle hints to his parents, an essay to his teacher, and ultimately a direct plea to Santa Claus, Ralphie is confounded by the adults’ infamous “you’ll shoot your eye out” defense.

Chris Carsten stepped into character as Jean Shepherd and began the production recounting the story in a radio studio—much the same as the real Jean Shepherd did. When the curtains rose, the audience was treated to a large scale, bisected version of the “house on Cleveland Street” wrought with meticulous emulation of the film. Even the costumes and props were recreated with such detail that I found myself marveling at the recognition that “that was the scarf Randy was wearing,” or “the kid in the line for Santa is wearing the same aviator helmet and goggles as in the movie!” This production is as faithful to the source material as any I’ve experienced, and when dealing with a film that has grown from cult status to tradition, it did not disappoint.

However, the original film was not a musical, so musical numbers and dance routines are integrated effortlessly to further accentuate the story. Ralphie’s “Red Ryder Carbine Action BB Gun” number conveys the hope and desperation any child at Christmas can relate to when they pine for that one gift, and let their minds wander as to what their life will be like once they attain it. Many of the large ensemble numbers showcased the amazing talents of child actors who portrayed students and Ralphie’s friends and peers. These young actors showcased extraordinary abilities as they sang, danced, and even at one point broke into a full tap routine that had the audience clapping and cheering.

The most beloved moments of the film are brought to life with song and dance in the most entertaining and humorous ways. Not only does “The Old Man” obsess over his “major award” in the form of the iconic “leg lamp,” but much of the cast joins in the large ensemble number showcasing dozens of leg lamps and dancers dressed in a similar homage. Santa’s seat and departing slide are all recreated in reverent recreation of the original scene.

What was most poignant and unexpected to me in the performance was the extra depth to the characters and overall theme that in many ways exceeded the original film. In the film, Ralphie’s parents are certainly caring and loving in a more subtle and nuanced way. The musical, however, delves deeper into the characters of “Mother” and “The Old Man,” through wonderful performances by Sara Zoe Budnik and Paul Nobrega. The level of introspection this version elicited was a pleasant surprise. Rather than dad merely being the comic relief and mom the caretaker, the performance truly explored who they are as parents, doing what they can to raise their children the best they could. Each scene that took time to look at them, I found rich characters who wanted to provide a memorable Christmas for their children while grappling with the realization that time, especially time with little children, is fleeting and gone before you know it. I remember specifically looking down at my seven-year-old daughter and taking a mental picture of her, wide-eyed and loving every minute of the fun. Her amazement as the Bumpus Hounds ran across the stage or savaged the Christmas turkey. Her applause as the children performed the number “You’ll Shoot Your Eye Out” with Miss Shields (portrayed wonderfully by Angelica Richie).

The musical was a delight, but beyond the entertainment itself was a message of parenting, family and of course, the joy of Christmas and that one perfect gift. Performances run through December 10 at the Aronoff.

Joe Maurits is the Director of Enterprise Licensing with Western & Southern Financial Group. He is a Cincinnati native and has three children with his wife, Laura.