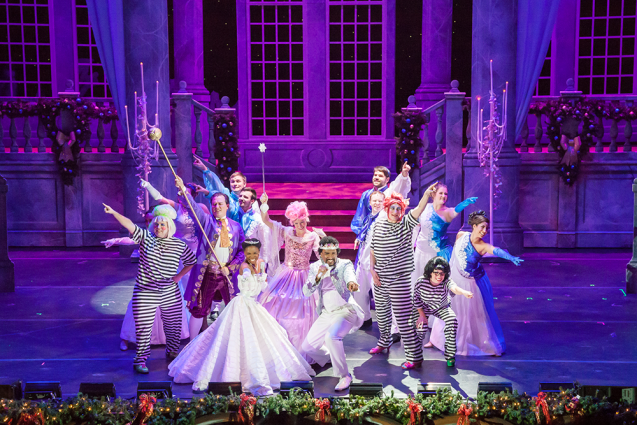 TCT's Cinderella is a pop culture treat for all ages

The story of Cinderella is a universally known fairy tale that evokes visions of a hard-working, kindhearted girl triumphing over her evil step-family to live happily ever after. The Children’s Theatre of Cincinnati’s production of…

The story of Cinderella is a universally known fairy tale that evokes visions of a hard-working, kindhearted girl triumphing over her evil step-family to live happily ever after. The Children’s Theatre of Cincinnati’s production of “Cinderella” stays true to that basic premise…but does so much more as they bring to life this enchanting tale in the style of British pantomime. By doing so, they create a hilarious, good time for the entire family that includes audience participation, pop songs (and yes, the 80s play a starring role!), slapstick comedy and characters that redefine your preconceived notions (especially the “Dames”). In a season that focuses on spending time with family, “Cinderella” is the best show around to laugh, learn and love every moment.

Your little ones may not pick up on all the pop culture references nor recognize some of the older songs (how badly does it date me that I still know every word to Whitney Houston’s “I Wanna Dance with Somebody?!”), but the seamless and brilliant integration of all of these elements was a sheer delight for the over-30 crowd. However, there are plenty of elements designed for the younger crowd, including a rousing rendition of an audience-appropriate rewrite of “Shut Up and Dance with Me” (re-titled “Get Up and Dance with Me”) and a hysterical version of Adele’s “Hello.” If the songs were not enough to make you smile, the audience participation will keep your little one on the edge of their seat and so excited about shouting (and not getting in trouble for it!) during a show. As my seven year old said, “It is absolutely nothing like the Cinderella we have seen before, but it is so much fun.”

By far the best part of the show are the character performances and their modern-day take on the story. Kiara Hines as Cinderella is effervescent with both her beautiful smile and joyful spirit. Kayla Burress flits and flutters as an exuberant and very pink Fairy Godmother. But the show is stolen by Michelle Wells as the Stepmother and her two “daughters,” played to “terrible” perfection by Chris Logan Carter (Pearl) and Joey Logan (Doris). The panto use of men dressed as women takes you on a journey of delightful absurdity that keeps you smiling and hoping for more scenes. There is literally nothing that prepares you for this group of “Dames” when they arrive at the ball in their holiday best and carrying a mini-BBQ pit, a liter of Mountain Dew, and a bag of Grippo’s chips…there are no words.

The Children’s Theatre reminds us to all lighten up and have some fun while driving some modern day sensibility with a long overdue rewrite that includes Cinderella and the Prince actually dating for a while and Cinderella going to college before they get married. It makes my heart so happy that this particular aspect is included in my daughter’s top three favorite things about the show. So take a little time this holiday season and bring your family to TCT’s Cinderella at the Taft Theatre. I dare you to figure out your top three favorite elements of this show…good luck choosing. And I would be remiss if I did not mention the beautiful Taft and its amazing crew who go out of their way to help families and friends find one another (and their seats) with minimal fuss. Happy Holidays to you and yours!

Christi Geary is the proud mom of two girls 10 and under, best friend and wife of her husband Brian, and an Associate Director at the Procter & Gamble Company focused on innovation insights and analytics. She enjoys and participates in art of all kinds, feeds an insatiable curiosity for learning, pursues different forms of exercise when she can find the time to balance out her foodie predilection, and delights in spending time with family and friends.