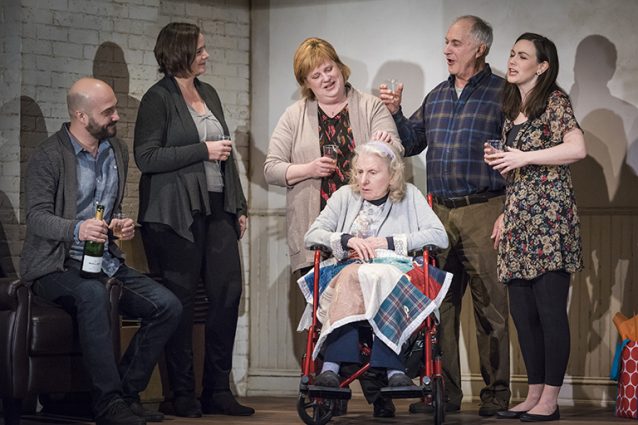 The Humans is deeply moving and sincerely human

Stephen Karam's "The Humans" opened last night at Ensemble Theatre Cincinnati, bringing with it just about everything you could ask for in a play. There are moments of laugh-out-loud joy, heartbreak and terror, beautifully realized…

Stephen Karam’s “The Humans” opened last night at Ensemble Theatre Cincinnati, bringing with it just about everything you could ask for in a play. There are moments of laugh-out-loud joy, heartbreak and terror, beautifully realized characters and even a song. None of it feels even remotely out of place. It’s no wonder “The Humans” won the Tony Award for Best Play in 2016. Every piece of every story arc is right where it should be. The result is a deeply moving and, appropriately enough, sincerely human production.

The Blake family is introduced as a warm and caring clan who sometimes push each other’s buttons. You know, like a family. Youngest daughter Brigid (Becca Howell) is playing host for Thanksgiving at her new apartment in New York. She and her boyfriend, Richard (Jeff Groh) have recently moved in together. Their unmarried status is one of the early indications of fissures in the family. While her mother Deirdre (Christine Dye) clearly makes an effort to avoid passing judgment, she also makes the effort clear for everyone to see.

Meanwhile, Aimee (Jennifer Joplin) is recovering from the dissolution of a very long-term relationship while simultaneously grappling with a chronic and embarrassing illness that will soon require a colostomy. Deirdre lends her support with constant chain emails (including a link to every article she finds about lesbians committing suicide) and, hilariously, offering to come with Aimee on her frequent trips to the bathroom.

For much of the play, Deirdre functions as expertly deployed comic relief. But “The Humans” forces you to consider Deirdre’s perspective. She’s often the butt of family jokes. She’s tacky. She’s not as subtle as she tries to be when she brings up marriage or religion. But she’s also fully aware of all of this, and she’s not going to change. Because what makes Deirdre who she is, above all else, is her sincerity and (given revelations that come up late in the story) her enormous capacity for love and compassion.

Erik (Tony Campisi), the father of the Blake family, is the epitome of the blue-collar Catholic patriarch. He gives heavy-handed advice, respects hard work and handles his problems with stiff stoicism. At least, that’s the image he projects. It’s evident early on that he’s in a vulnerable place, and as the family’s dysfunction begins to assert itself he has a harder and harder time hiding that vulnerability. Toward the end, he provides one of the two most powerful moments you’ll probably see on stage this year when he finally fully reveals the details of his recurring nightmare, realizing what it means even as he describes it.

The second moment comes courtesy of “Momo,” (Dale Hodges) Erik’s mother. She’s wheelchair-bound and suffering from late-stage dementia. The rest of the family share brief stories about who she was before her mind started to deteriorate. But at one point, Deirdre opens an email that Momo wrote to her granddaughters on the day she started forgetting their names. I defy you to hear her message—the last coherent words of a long and storied life—with dry eyes. Nothing I could say to describe it would do it justice.

“The Humans” is playing now through February 17 at Ensemble Theatre Cincinnati. Do yourself a favor and don’t miss it.