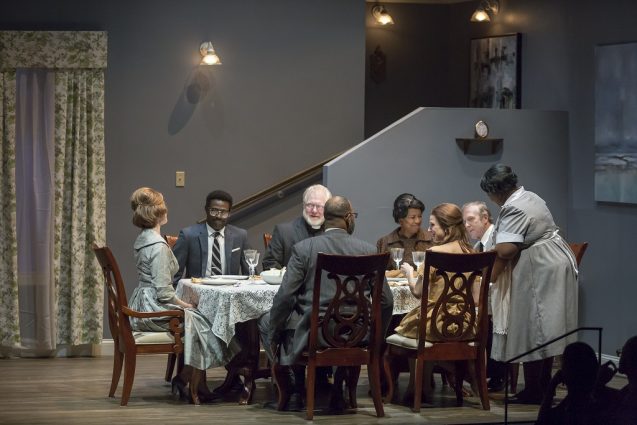 Guess Who's Coming to Dinner-398

Guess Who’s Coming to Dinner gives a mouthful of surprises

This year marks the 50th anniversary of the 1960s classic, “Guess Who’s Coming to Dinner,” originally starring Sidney Poitier as Dr. John Prentice. Being a person who knew of the movie but had not personally…

This year marks the 50th anniversary of the 1960s classic, “Guess Who’s Coming to Dinner,” originally starring Sidney Poitier as Dr. John Prentice. Being a person who knew of the movie but had not personally watched it, I thought I had the gist of the story down.

Entering Cincinnati Shakespeare Company’s theater, I was immediately time warped to the 60s. There was a crystal ash tray on the clawfoot coffee table. Brass picture frames with photos of loved ones. Lampshades with mini tassels. Green plants and wire porch seating that resembled a terrace. I couldn’t help but smile and think of my great grandmother’s house.

The first scene begins how you think it would. A happy white couple, living their happy life with their jolly, trustful, like-family African-American housekeeper. Matt (Barry Mulholland) and Christina (Annie Fitzpatrick) Drayton are expecting their daughter home in 10 days. The father sets the premise for a perfect father-daughter relationship. He is anxiously awaiting his daughter’s arrival and, to his surprise, it comes sooner than 10 days.

Their daughter, Joanna (Caitlin McWethy), arrives early and surprises them all with a house guest. Now, Joanna is the perfect mix of a hopeless romantic, filled with optimism. As soon as she reveals that her house guest, Dr. John Prentice (Darnell Pierre Benjamin), is not just a friend, but the man she wants to marry, everyone is stunned. Not because of her quick and infatuated love for him, but because he is a colored man. Yes, I used the word colored. Being a woman who grew up in the 90s, I am more familiar with Black or African-American. Hearing the word colored shocked me a little.

As the play continues, more characters are introduced to Dr. John Prentice, the colored man. When he finally gets alone time with the parents of his new-found love, he asks for their blessing in marriage, and reveals if they do not give it, he will not marry their daughter, essentially breaking her heart. He does not do this with ill intent. He simply wants to protect Joanna’s heart. They will have to endure scrutiny from the world. It is best to not have it from her parents.

The mother, a champion for her daughter, believes in the marriage. The father struggles with the idea of his white daughter marrying a colored man. In the 60s there were still places where they would have to drink from separate water fountains. Any father would want to protect his daughter from danger—from the itsy-bitsy spider to the racially-charged language that would be spat at her by humankind. The first act ends with more surprise guests: Dr. Prentice’s parents (Ken Early and Thursday Farrar).

The second act brings a burst of emotion, not only from the actors, but from the audience as well. When I looked around the theater and everyone was glassy eyed. Dr. Prentice and his father deliver a riveting performance full of hurt, despair and love for one another. His father can’t understand why he would want to endure the hatred he would face as a colored man married to a white woman. Dr. John Prentice emphasizes that he will not be defined as a colored man, but as a man who not only has a flourishing legacy, but a flourishing love. If I had been wearing pearls, I would have clutched them throughout this entire exchange.

In the end, Matt Drayton lets his love for his daughter overcome his fear and gives his blessing for their marriage. It takes some reasoning from his wife, guilt from his daughter, bible verses from the preacher, and belittlement from his future in-laws, but he gets there. Dr. John Prentice receives the respect and blessing he was searching for. As always, love wins. Oh! Spoiler alert! They never take a single bite of dinner!

Marissa Staples is a published author and writer for “The Voice of Black Cincinnati.” She developed her love of arts from her mother, Kandi. A native of Cincinnati, she loves to travel. If she is not traveling, you can find her reading, writing, volunteering or drinking wine. Wine always brings smiles, friends and creative dialogue.