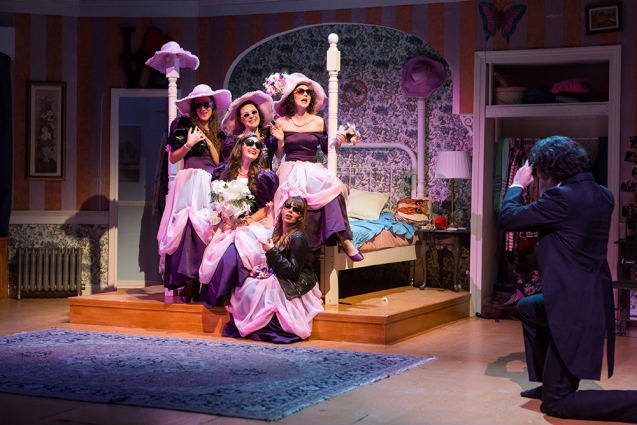 Five Women confront their insecurities (in the same dress)

Last night was the first time I’d been into a woman’s bedroom in 1993 Knoxville. I am glad that I was. She had a makeup table, an exercise bike, a poster of Malcolm X, and…

Last night was the first time I’d been into a woman’s bedroom in 1993 Knoxville. I am glad that I was. She had a makeup table, an exercise bike, a poster of Malcolm X, and a four post bed. There were pictures taped to a mirror, a small table, a window bed, and five women, all of them wearing the same outfit.

“Five Women Wearing the Same Dress,” presented by Cincinnati Landmark Productions at the Warsaw Federal Incline Theater tells the story of a wedding day experienced through the eyes of the bridesmaids. Like many affluent southern weddings, there are large fancy hats, low-country accents, copious cursing, and copious gin. The room belonging to the sister of the bride makes the set, and the story is told in snatches by whatever combination of the five women happen to be in the room at the same time.

The five, each with a painful backstory, weave a comic and sometimes circuitous route around the central theme of the play: everyone hates the bride. Referred to as a “rich white republican”, the bride exemplifies for each of them something they are sensitive about themselves. Whether that sensitivity is beauty, money, success or being straight, the women lament their lives and histories with the bride.

The Five Dresses
Meredith, the sister of the bride and owner of the bedroom, is the most furious. She’s what we’d call a Millennial today—recent college grad, bucking her parents, wanting to go anywhere but home.

Frances, the hyper-religious zealot cousin of the bride, abhors liquor and drugs because “I am a Christian” until she meets a man and has her first glass of champagne. She’s innocent and mostly exists as comic relief.

Trisha, the jaded former beauty, has no belief in or need for love, and acts as the calming, southern, sexually awoken sage to the group.

Georgeanne is the drunkest, a depressed housewife to a “wet toast” husband whom she hates. She sees an ex-boyfriend at the wedding and her entire reality stretches at the seams.

Mindy, the uncloseted lesbian sister of the groom and the highlight of the show, demonstrates that self-deprecation and self-possession are sometimes the best ways to cope with a tough world.

Landmark and the Incline do a great job, again
This performance was attended by, I would guess, 90% women. I can agree that the title would lead you to believe it’s just about “women’s stuff,” and it is. But women’s stuff is all of our stuff: it’s love, rejection, hope, sex, defeat, fear, anger, and champagne drunkenness. It’s a show that anyone will get a kick out of, just maybe don’t bring your kids.