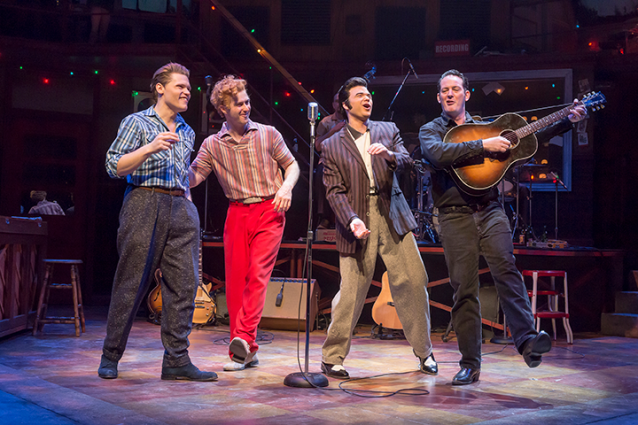 Cash. Elvis. Perkins. Lewis. They are the titans of Rock and Roll’s infancy, the marquee names of Sam Phillips’s Sun Records, and for one day in December of 1956, they found themselves together in a…

Cash. Elvis. Perkins. Lewis. They are the titans of Rock and Roll’s infancy, the marquee names of Sam Phillips’s Sun Records, and for one day in December of 1956, they found themselves together in a studio for the first and only time. A young engineer had the wherewithal to press “record,” a United Press photographer was on hand for a snapshot, and the afternoon was forever etched to the annals of music mythology. Fifty years on, it was adapted into the Broadway musical “Million Dollar Quartet,” which opened this past weekend at Playhouse in the Park for a four-week run.

The actual “Million Dollar Quartet” session was a loose selection of gospel, blues, and Christmas songs, frankly more important for its historical nature than its content. Only three of the cuts recorded at that session appear in the musical, which takes the setting and uses it as a venue to tell the story of the Sun recording stars. “Million Dollar Quartet” finds all five of its protagonists (Phillips plays a major role as well) at their own distinct crossroads. Elvis is hugely successful at RCA, but feels lost in the corporate shuffle and is missing Phillips’s personal touch. Perkins is still looking for a follow-up hit a year after “Blue Suede Shoes”, and he fears being overshadowed by his label-mates. Cash is crossing over on the pop charts, but is still desperate to make the gospel album Phillips deems uncommercial. Lewis is hungry but unproven, Sun’s new wunderkind four months away from superstardom. And Phillips himself is fielding lucrative offers to buy out everything he’s worked so hard to build.

The show’s setting makes its songs a natural fit—not always the case for “jukebox” musicals that shoehorn disparate songs into a narrative arc. It deftly toes the line between Broadway and a tribute concert, seamlessly slipping in biographical facts and expository monologues between songs. And, my goodness, the songs. “Blue Suede Shoes,” “Who Do You Love?,” “That’s All Right,” “I Walk The Line”—these are at the foundations of a half century’s worth of rock, country, and pop music, and these renditions are faithful without resorting to mimicry.

Each member of the “Million Dollar Quartet” cast does tremendous work, but Sky Seals and Sean McGibbon are the jewels of this show. Seals absolutely nails Johnny Cash’s looming presence and distinctive mannerisms, carrying the larger-than-life character with gravitas. I feared throughout the first act that McGibbon’s Jerry Lee Lewis would only be played for laughs, but the second half sees him come unhinged in a fit of religious fervor that shows the dark complexity behind his manic braggadocio. And all of them can play. John Michael Presney’s Carl Perkins is as skilled with a Les Paul as he is representing the musician’s gritty Tennessee roots. Ari McKay Wilford is dynamite as Elvis, but the script never fully rounds his character out, which is a disservice to arguably the biggest name of the bunch.

James Ludwig is at the center of everything, ringmaster and narrator, as the dynamic and passionate Sam Phillips. The pride in his creation and torment over its future are both evident in Ludwig’s nuanced portrayal. When the band is performing, he’s behind them in the studio, reveling in his artists’ work. Dyanne, played here by the magnetic Bligh Voth, does an admirable job of breaking up the boys’ club. Elvis did, in fact, bring a girlfriend named Marilyn Evans to the original “Million Dollar Quartet” session, and she was even sitting on the piano just out of frame in the famed photo of the four musicians. Dyanne expands Evans’s role, getting her own moments in the spotlight (a thrilling “I Hear You Knocking”), as well as becoming a confidant for each of the five men as they wrangle with their individual dilemmas. Eric Scott Anthony (Jay Jay Perkins) and Zach Cossman (W.S. Holland) are in the background as the ever-present rhythm section, but get their own moments to shine as well.

All told, Playhouse’s “Million Dollar Quartet” is a brisk, entertaining joy—a snapshot of five legends at a pivotal point. The show is detailed enough for diehards, but packed with sufficient exposition and recognizable hits for even Sun neophytes to feel fully immersed. The audience was on its feet and cheering by the time the extended epilogue rolled around, but it’s a bit bittersweet to think that these five giants were never in the same place again. Thanks to shows like “Million Dollar Quartet,” though, they live on forever in their songs.