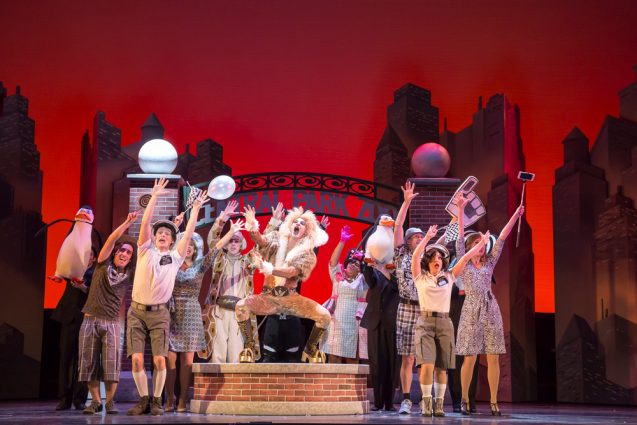 Madagascar is a wild time

Broadway could learn a few things from The Children’s Theatre of Cincinnati. Namely, that Graeter’s ice cream is a perfect addition to live theater. Also, the stage is much easier to see when everyone in…

Broadway could learn a few things from The Children’s Theatre of Cincinnati. Namely, that Graeter’s ice cream is a perfect addition to live theater. Also, the stage is much easier to see when everyone in front of you is 4 feet tall. We settled into our seats at the Taft Theatre with a pack of cookies and a couple bottles of pop. There was a brief talk by Roderick Justice on “theater etiquette,” and the show began.

Starring Alex the lion with 80s eyeliner and teased 80s hair (A. James Jones), Marty the skateboarding zebra (Kelcey Steele), Gloria the sassy hippopotamus (Joy Rolland-Oba), and a hypochondriac giraffe named Melman (Spenser Smith), “Madagascar: A Musical Adventure” brings songs and laughs to the miniature (in stature) audience. Unlike grown-up theater, TCT encourages the audience to laugh at every opportunity.0

The Story Behind the Name
The story of Madagascar basically follows a group of four animals at the Central Park Zoo who, through some hijinks, leave the zoo and wind up in Madagascar. They are domesticated by their lifetime in the confines of the zoo, and are woefully unprepared for a life in the wild. As you can imagine, chaos and song ensue. Landing on an island ruled by flamboyant lemurs, friendships are tested along the lines defined by the animal kingdom. Can Alex the Lion avoid killing and eating his friends? This is a common theme from family vacations I have been on.

To get out of the zoo in the first place, the animals follow a small group of tuxedoed penguins staging a daring escape. The penguins are portrayed as puppets wielded by cast wearing black suits, they provide some tongue-in-cheek humor for the adults in the room.

The show hits its comedic peak when King Julien and the rest of the lemurs enter the action. The King, played by Chris Logan Carter of local “Equus” fame, has the audience laughing spasmodically throughout.

A Great Event for Kids
As a dad, the best part of The Children’s Theatre is introducing kids to the performing arts. The treats are good, the atmosphere is accepting, and the material is compelling for kids. The performance time is about an hour with no intermission. It’s just the right length of time to keep kids engaged. With the talk about using eyes and ears, and not mouths, during the introduction, we get a primer in how to behave during live performances. Plus, it gets us up off the couch and out into the world.