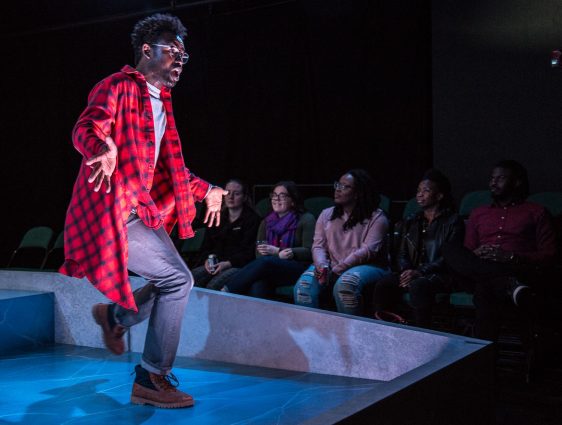 "Kill Move Paradise" at Know Theatre of Cincinnati opens in the land of forgotten hashtags, where Isa, played by Darnell Pierre Benjamin, is the first of four to arrive to an empty, cloud-like limbo. Equipped with…

“Kill Move Paradise” at Know Theatre of Cincinnati opens in the land of forgotten hashtags, where Isa, played by Darnell Pierre Benjamin, is the first of four to arrive to an empty, cloud-like limbo. Equipped with an endless list of names, an after-life operating manual and the gaze of a predominantly white audience (later referred to as “America”), he seems like he’s been there awhile. Angry and frustrated, he turns to address the audience, hauntingly asking, “You all come to see me?” These words, repeated throughout the show, allude to the humanization that black people vie for in life, now cursed with the hyper-visibility of black pain and loss of agency in the afterlife on stage for the world to see. We, the audience, sit uncomfortably as Isa explains his purgatory, recollecting the first time his blackness was perceived as a threat. He was eight and his teacher winced at his attempt to hug her.

Suddenly, lightning strikes, thunder roars and in drops Grif (Landon Horton), then Daz (Elliot Young) and later, 12-year-old Tiny (Crystian Wiltshire). One after the other, they enter from all sides of the frozen audience to take center stage — a procession of insurmountable tragedy. They all start to realize the commonality of how they got there: they’ve all been slain at the hands of state-sanctioned violence against black bodies. Each one with their own account and grieving process.

Daz, working through grief, tries to escape by desperately clawing at the walls of their cloud-esque confinement until he is kneeling over, convulsing into himself. Then he tries to rationalize by referring to their murders as martyrdom, but Isa quickly resolves that they aren’t martyrs, they are sacrifices. He explains, martyrs know they are dying for a cause and choose to die as an act of total commitment. But contrary to martyrdom, their circumstances, their lives and their resolves were stolen from them; the decision of their untimely demise was made for them against their will. They were sacrificed, as millions of other black bodies have been, to the insatiable beast that is anti-black racism, capitalism, patriarchy, imperialist white supremacy that America is built from.

As he tries to process the moments prior to his arrival, when he was with his child and wife at a traffic stop, Grif is visibly enraged by the audience’s passivity and lack of urgency. Weary, he darts off stage and comes back with a folding chair. He got it, he says, from a room filled with creations, devices and inventions; scripts and blueprints; books and experiences that do not exist because the black lives that would have introduced these treasures to the world were extinguished prematurely. The gravity of Grif’s words swells over the audience.

As we sit emotionally unprepared, 12-year-old Tiny swoops in on an adventure with an orange tipped toy gun. Everyone knows why Tiny is there except Tiny. Isa, Daz and Grif conclude that they must maintain Tiny’s game of Cowboys and Aliens to ease Tiny into discovering his fate. As the charade continues, Isa, Daz and Grif contort their bodies into nefarious, sinister creatures that are slain by cowboy Tiny. As Tiny is acting out this game, he begins to talk about his last moments, seeing a giant spaceship arrive and then hearing a loud “pop.” Fantasy merges with reality as the police become the cowboys and Tiny the menacing alien. We are along for the ride of Tiny’s spiral of consciousness to the awareness of his death. Once he arrives to this ghastly conclusion, he breaks as the others did before him. He looks at the audience and asks, “You all come to see me?” and, “Do I scare you?”

All of the actors then begin to perform palatable black tropes, from Uncle Remus to the Jackson 5, as the recounting of Tiny’s murder is synthesized through a campy black sitcom. The intensity of the subject matter delivered through such a trite medium is jarring. The characters are all forced to smile and make light of their pain as black people are often called to do in the face of incessant racial trauma.

Isa comes forward to list countless names, from Emmett Till to Trayvon Martin to India Clark to Sam Dubose. Each name reminds you that these people had a story before their deaths, each with a purpose and cut-short destiny, each were sacrifices. As Isa is signaled that it is time to go, he prepares Daz, Grif and Tiny to move on, the audience is left to remember this place and our apathy. We are charged to not only proclaim, “Black Lives Matter,” but mean it in our everyday lives.