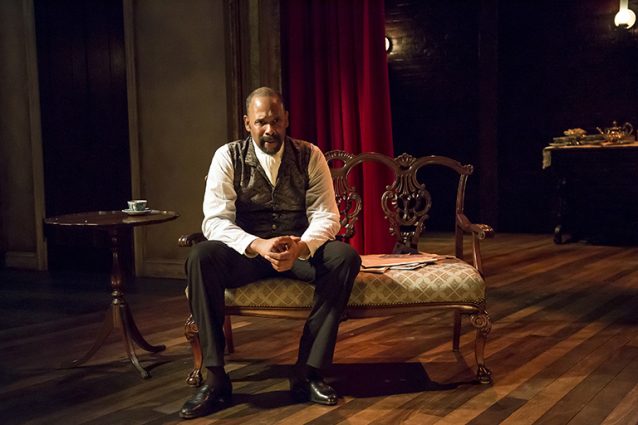 Based on the true story of African-American actor Ira Alridge (1807-1867), Ensemble Theatre Cincinnati's production of "Red Velvet" brings race, language and Shakespeare to center stage. I was unfamiliar with his story, but as soon…

Based on the true story of African-American actor Ira Alridge (1807-1867), Ensemble Theatre Cincinnati’s production of “Red Velvet” brings race, language and Shakespeare to center stage. I was unfamiliar with his story, but as soon as the lights dimmed and thunder and lightning cracked, I was captivated. Now, before I explain the dark details of this play, let me say there was comic relief sprinkled throughout.

In the 1800s, Ira Aldrige, played by Ken Early, is set to make his mark as a Shakespearean actor. He gets his big chance when the legendary Edmund Kean collapses while playing the role of Othello. An old friend by the name of Pierre, played by Brent Vimtrup, brings Ira to London to be the first African-American actor to play Othello. Pierre is ready for Ira to take the lead, but others are not.

As soon as Ira walks into the room and introduces himself to his acting peers, silence falls across the stage. An African-American man taking the leading role? They’re shocked. Appalled. Impressed. His acting speaks for itself. Some have even heard his name and know of his work from playing slave roles. One person in particular, the son of the collapsed actor that inadvertently caused all of this to happen, is irate. His anger shows as he stomps back and forth across the stage.

Since Pierre vouched for Ira, the actors trust him and accept working with him. They practice scenes together, take suggestions from each other, and fall into their characters well. Pierre warns Ira to take things slow. The cast may be accepting him, but the audience will be a different story. Ira, being the strong, motivated actor he is, agrees, but continues to do things his way.

Ira and his stage muse Ellen, played by Kelly Mengelkoch, develop a personal relationship. Rehearsing together, they decide to portray their character as raw as possible. In the scene where Othello chokes his lover, they decide to add more rage. Ira will grab her by the neck tighter and toss her from side to side. This idea proves dangerous to Ira’s career. We in the audience don’t actually see this scene take place, but one can imagine how well an African-American man choking a white woman on stage would be received in the 1800s. The day after the performance, critics in the paper express their disgust.

With the threat of people not coming to the theater anymore, Pierre makes a tough decision and tells Ira he will not be acting as Othello. Ira, who thought he was making history and was proud to perform in front of his parents, doesn’t understand why his friend would do this to him. Friction develops between them and they go toe-to-toe on where their loyalties and responsibilities lie. In the end, Ira’s pride is destroyed. His heart was broken. I even think it drove him a little crazy.

In today’s society, these problems still exist. I’ve witnessed projects where an African-American man or woman has come in to do a job, only to be met with resistance and uncertainty. Even after performing to their ability, they still to win respect and are often forced out of leadership positions. So, this was happening in both the 1800s and the 2000s? Impossible, is what I would like to think, but that is not the case.

It’s the same with women speaking their mind. In the first half of the play, Charles Kean, played by Jared Joplin, screams at his fiancé for voicing her opinion, telling her she is just a face and a skirt with nothing in between. If you look around today, women are still fighting to be heard, to be valued, to be appreciated.

Marissa Staples is Cincinnati published author and writer for “The Voice of Black Cincinnati.” She developed her love of arts from her mother, Kandi. Being a native of Cincinnati, she loves to travel. If she is not traveling, you can find her reading, writing, volunteering or drinking wine. Wine always brings smiles, friends and creative dialogue.