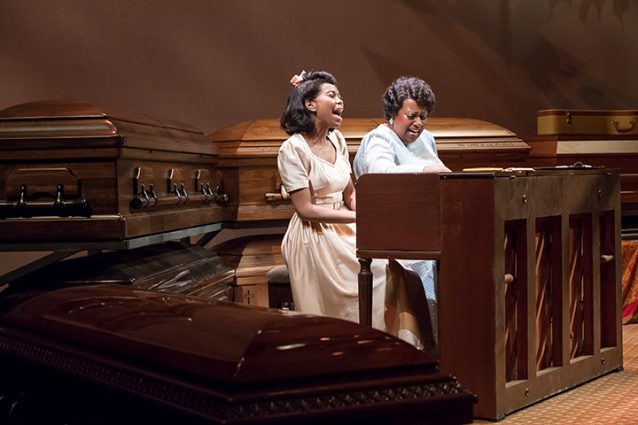 Gospel rock in a funeral parlor

"Marie and Rosetta," a story of mid-40s rock gospel singers told entirely in the showroom of a funeral parlor, rocks Cincinnati Playhouse in the Park this month. Sister Rosetta Tharpe, played by the soulful Miche…

“Marie and Rosetta,” a story of mid-40s rock gospel singers told entirely in the showroom of a funeral parlor, rocks Cincinnati Playhouse in the Park this month.

Sister Rosetta Tharpe, played by the soulful Miche Braden, educates and cajoles her young sidekick, Marie Knight (Chaz Hodges), through an uninterrupted hour and 40 minute performance. Rosetta, whose real-life personality will be inducted into the Rock and Roll Hall of Fame this April, plays the piano, rocks the guitar, and belts out bluesy takes on her own gospel songs.

The story centers around the seemingly young and innocent Marie, who is a new recruit to the southern tour of Sister Rosetta’s schedule. They are rehearsing in a funeral home because it is in impossible for black women to stay in hotels in the 1960s Jim Crow South. While racism makes itself known throughout the performance, it is more as a fact of life than a political commentary, and in some ways all the more powerful for it.

Through storytelling, musicianship, and the occasional tongue-lashing, Rosetta brings the coquettish Marie forward into the light (of showmanship). Initially hesitant as to the “sinful” nature of hip-swaying, energetic gospel blues, she comes around to the joy-inspiring nature of Rosetta’s style. By the end of the performance, the audience knows that one day Marie will be a star in her own right.

While Marie and Rosetta do not play their own instruments — piano and guitar — they are backed, through a one-way screen, by a terrific Emmy-winning pianist Katreese Barnes and guitarist George Naha. The progression of Marie’s playing mirrors the broadening of her understanding of gospel, getting faster, looser, and more energetic.

All in all, “Marie and Rosetta” is an entertaining dialogue between two women at opposite ends of their journey finding common ground in their love of music and their own life experiences. Braden’s Rosetta brings the roof down quite a few times with her bluesy, enthusiastic songs.

To the usher who fell off the stage: Are you okay?