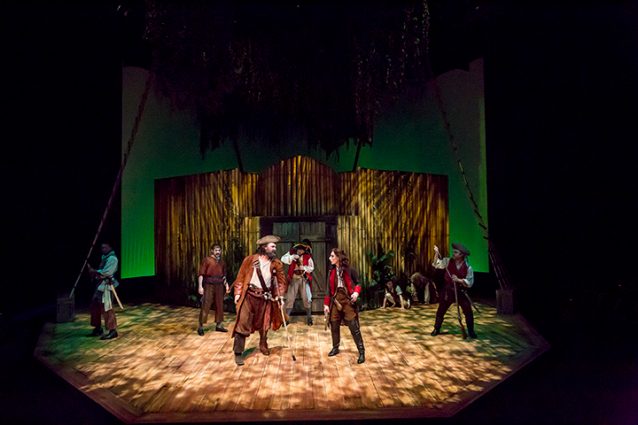 Whenever a show welcomes kids of a certain age there is a palpable level of excitement. Kids being earnestly excited about theater brings a dynamic that you just don’t get out of serious-minded adults. "Treasure Island,"…

Whenever a show welcomes kids of a certain age there is a palpable level of excitement. Kids being earnestly excited about theater brings a dynamic that you just don’t get out of serious-minded adults. “Treasure Island,” playing now at Cincinnati Playhouse in the Park, is exactly one of those shows. The recommended age of 10+ skews the audience decidedly younger, and much for the better. The laughs are harder, the gasps louder, and the bathroom line at intermission moves a little faster.

The story of “Treasure Island” is infamous — first the book by Robert Louis Stevenson, then movies and theme parks and a Las Vegas Casino. There’s hardly more thrilling an idea than the prospect of untold hidden treasure marked by an X on a secret map. This story epitomizes the genre, with a hiding pirate, a stolen map, and an adventure across the ocean.

Young Jim Hawkins (Em Grosland) finds himself thrown in with the mutinous Long John Silver (Jeffrey M. Bender) in an exciting attempt to find the infamous Captain Flint’s treasure. Accompanied by the town doctor (Barry Mulholland), the squire (Andy Paterson), and the stodgy Captain Smollett (Grant Goodman). As an aside, one of this reviewer’s biggest pet peeves is bad British accents perpetrated by American actors. I can confidently say that the accents here are fun, unobtrusive, and lend themselves well to the performance.

The Playhouse is an intimate theater, where you are never very far from the stage. Our seats were in the second-to-last row, and we still felt part of the action. The sword fights flashed and clanged, the musket shots boomed and startled, and we had a vantage to see the actors as they often made their way up and down the aisles. More so than many performances, the pirates wended their way up and down the stairs to bring the performance into the crowd.

“Treasure Island” is also full of plenty of comic relief. The Squire, played by Andy Paterson, brought out laughs nearly every time he talked. At one point he slipped and fell on the stage (accidentally, I think) and recovered by shouting “Slippery when wet!” before scampering off the stage. The sign of a true professional. The marooned sailor Ben Gunn and his obsession with eating cheese again also provides a recurring comic burst.

All in all, “Treasure Island” is family-friendly and fun for anyone. Don’t expect it to be Tolstoy and you’ll enjoy yourself. “Treasure Island” runs for about 1:50, with Act I being 65 minutes and Act II being 45.