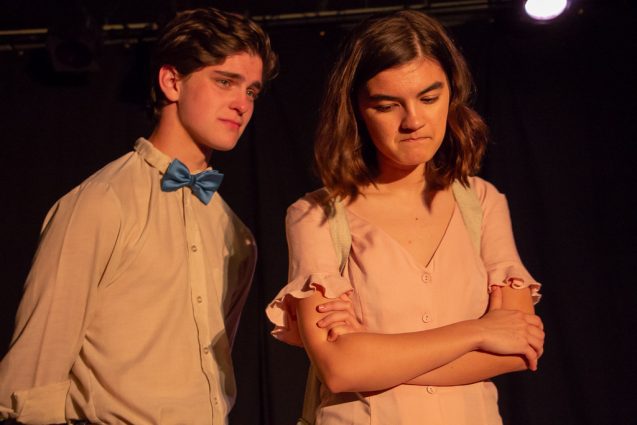 'Annalise' — Anxiety is a Terrible Friend

I walked into Vicky Alcorn’s "Annalise" at the Art Academy of Cincinnati not knowing a thing about it. It could have been a musical, a staged battle royale or a foreign language film. I was…

I walked into Vicky Alcorn’s “Annalise” at the Art Academy of Cincinnati not knowing a thing about it. It could have been a musical, a staged battle royale or a foreign language film. I was met, however, with a cleverly crafted drama about growing up, falling in love, and getting beat to hell by mental illness.

The opening show of 2018’s Fringe Festival does not disappoint. Written and directed by Highlands High School senior Vicky Alcorn, the play tells the story of a young Annalise (Audrey Cann/Izzy Moses) and how she deals with her sometimes-crippling-but-always-present anxiety. Through flashbacks narrated by the adult version (Cann), we learn what it was like for her to cope with the ever-present passenger.

The twist: anxiety is played by a real person. Anna’s mental illness is manifested as her friend Alex (Dustin Parsons) who follows her, is the bastardized voice of manic reason in her head, and drives her to push people away and avoid social interactions at all costs. It is, frankly, a pretty smart way to demonstrate the “voice in her head.” Rather than a voice over, or some other contrived aural tactic, Alex literally follows her around, pulls her to the ground, and makes sure we know what she is dealing with.

As any legitimate high school story must include, there is a love interest with its own complications. Danny (Grant Sower) has his own secret friend Debbie (Haley Whitt) who is his suicidal depression. Whitt, more than any character, truly personifies the brutality of what it means to self-loathe. I’m not sure if this is a compliment to the actress or not, but my notes say “DEBBIE IS BRUTAL.” Adult Danny (Braxton Broering) lets us know the importance that Anna plays in his own life.

If anything, “Annalise” has me excited for the rest of the Fringe Festival. It’s a well-written performance, and the minimal cast and crew did a great job with the simple sets in the makeshift venue. Keep up the good work — I hope to see all these kids on bigger and better stages in the future.