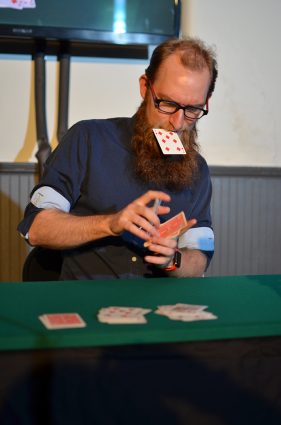 Erik Tait will tell you that he’s a liar. In fact, that’s the first thing he told the audience at Thursday night’s performance of "Please Shuffle the Cards" at the Cincinnati Fringe Festival. He will…

Erik Tait will tell you that he’s a liar. In fact, that’s the first thing he told the audience at Thursday night’s performance of “Please Shuffle the Cards” at the Cincinnati Fringe Festival. He will also tell you that nothing he does is truly magic. But, given that we have established that he is a liar, there is really no good reason to believe him.

“Please Shuffle the Cards” is a sleight of hand show that teases at breaking the fourth wall. A deck of cards sits on a table in the front of the room, and audience members are invited to approach it freely, shuffle it as much or as little as they want until the show starts, at which time an audience member is designated to place it in an exposed place until further notice. Audience participation is key in this practice — after all, if a magician pulls an ace from a stack of cards in the woods with nobody to see it, does anybody care?

Tait’s illusionist skills are truly impressive, and if you don’t want to take my word for it, find the guy in the audience who exclaimed “WOW!” loudly after every trick — never change, my dude. What sets him apart, however, is the extent to which he sought to draw the audience in. Tait is quick-witted and charming, qualities that keep an observer engaged in something that is otherwise so patently difficult for them to comprehend. His audience banter was centered around almost explaining the secrets to the tricks he performed, and continually reassuring us that what he was doing was in fact a skill, not a trick deck, not divine intervention, and not psychological manipulation.

Reaffirming this claim repeatedly did nothing to dispel the mystery of how he successfully performed a mind-boggling number of tricks at breakneck speed. It was highly enjoyable, and somehow, I have a feeling I would enjoy it equally as much if I saw the same show a second time.

When’s the last time you spent an hour watching someone perform card tricks that blew your mind? Make time to catch Erik Tait’s “Please Shuffle the Cards” at the 2018 Cincinnati Fringe Festival — he has additional performances at the Over-The-Rhine Community Church on June 2 at 4 & 8:30 p.m., June 3 at 4:45 p.m., June 6 at 7:45 p.m. and June 9 at 4:45 & 6:30 pm. Erik Tait may claim to be a liar, but I can truthfully promise that you will have a great time.