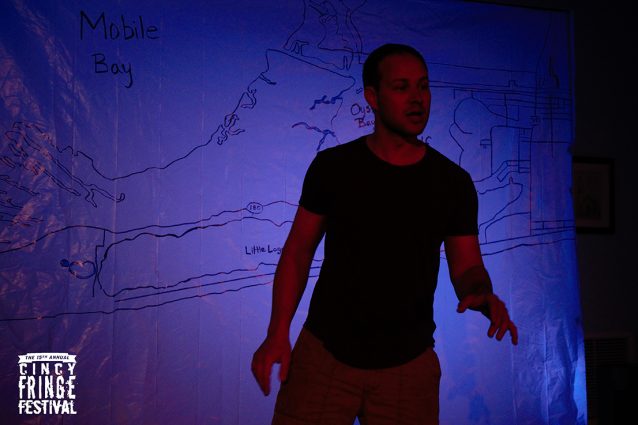 When we start to tug on the threads of mythology that tie a family together, the outcome usually only goes one of two ways: complete unraveling, or a tighter end product. In the case of…

When we start to tug on the threads of mythology that tie a family together, the outcome usually only goes one of two ways: complete unraveling, or a tighter end product. In the case of the Alabamian family we meet in “of Monster Descent,” that tugging does both.

Local playwright duo Trey Tatum and partner Bridget Leak have explored family before, and the ties that bind, but in my own past experience — I saw their Fringe entry last year, “The Disappearance of Nicole Jacobs” — I didn’t experience such a visceral connection as I did to “Of Monster Descent.”

The stage at 1208 Race Street — the First Lutheran Church — is simple, with just a hand drawn map featuring Mobile Bay and the finger-like web of land floating into the bay and the Gulf of Mexico. Tatum is the only performer, and he utterly commands the stage. His voice has a quick-change capability he utilizes to its fullest degree, slipping seamlessly from main character (unnamed, or at least I didn’t catch the name, but it feels very autobiographical, so it may be Trey) and his tour de force father and equally wild grandfather, affectionately — or is it deferentially? — called Granddaddy, with moments from his mother and younger brother Clay.

Family is the bedrock of the story, and Tatum weaves a tale of a fateful summer when a hurricane looms and monsters beckon from the corners. He also deals masterfully with the way mental illness can do the same — looming and beckoning, hiding in plain sight, threatening to rain down on a family, and individuals, at any given moment. The tension he builds as he describes this late-nineties set story is palpable. At one particularly emotional and furious point, I felt tears spring to my own eyes, and noticed a few audience members also looking on the brink.

That’s where we stay for much of “Descent.” We’re on the emotional brink, the edge, the gulf between land and life, the calm before the storm. It’s hard work, building to a crescendo and ebbing back from the unleashed fury in a believable and digestible way, but Tatum makes it look easy. Well, effortless. Well, actually, no, not even that. He is like a tightly-coiled spring, bouncing up and curling down at the right moments, and it’s clear how well-rehearsed this play is.

If we’re taking the autobiographical cue, then it makes sense he’s internalized this fateful summer, and is working through all the aftermath, one line, many well-executed hand gestures, and one great Southern accent at a time. Tatum drops a breadcrumb trail of pop culture and American life references from “Jonny Quest” to “Where the Wild Things Are” to Southern aphorisms and life observations that, when collected, as they are very neatly (but not too neatly) at the end, the whole picture, the whole play, the whole summer, makes perfect sense.

Batten down the hatches, and prepare yourself for a storm that winds in and out of a few generations of a family. Mythology, pop culture, mental health, and self-awareness interweave throughout “of Monster Descent” to create a tapestry the Three Fates themselves would be envious of making.

Leyla Shokoohe is a newly-returned college student, currently a senior at the University of Cincinnati in the Journalism program. She is an avid Cincinnati arts advocate and previously worked in marketing and communications for Cincinnati Ballet, Cincinnati Symphony Orchestra and ArtsWave. She is a freelance journalist for “CityBeat,” “Cincinnati Business Courier,” WCPO, “Movers and Makers,” and “Cincinnati Refined.” When she’s not doing homework or freelancing, she likes to dance with DANCEFIX, drink copious amounts of coffee, catch live music, and people-watch around the city.