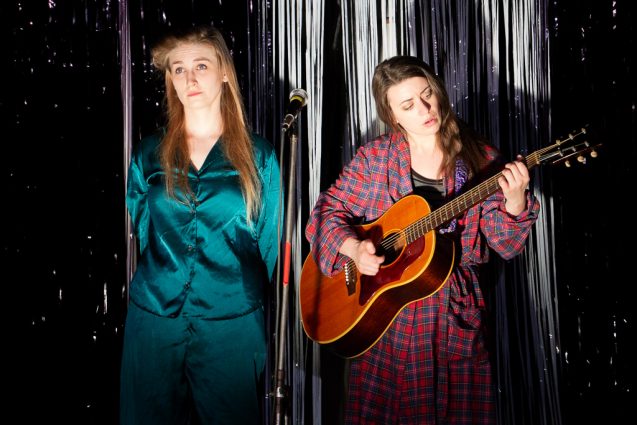 'One More Bad Thing' is definitely an intriguing thing

I’ll let you decide if "One More Bad Thing," the Fringe play from Homegrown Theater and writer Ben Dudley, is just that, but I will tell you that it’s most definitely an interesting thing. It’s…

I’ll let you decide if “One More Bad Thing,” the Fringe play from Homegrown Theater and writer Ben Dudley, is just that, but I will tell you that it’s most definitely an interesting thing. It’s a dive into the psyches of the Morton sisters, a pair of once-famous child stars who are now grappling with the women they’ve become in the fallout of their fame.

The stage is set quite literally from the moment the lights go down at the Art Academy Studio, where the show runs through June 9, as younger sister Kate Morton (an endearing Erin Ward) enters through metallic curtains in pigtails and a robe, nervously clutching a guitar, ready to play the Pennsylvania State Fair. Her manager, Mr. Allen, looms close — he’s played effectively on just-this-side of creepy by Dylan Shelton — and as he takes the stage with a tearful Katie (childhood nickname) who’s now realized her sister Jenny has abandoned her, the two undergo a tete-a-tete that reveals this is, in fact, a dream.

Well, nightmare might be more accurate. Jenny ran away that day, the girls’ mother died, Kate’s been alone ever since. The auspicious beginnings of child stars rarely turn out well (paging JonBenet, Honey Boo-Boo, etc.), and Kate and Jenny are no exception. We discover that this is a recurrent dream of Kate’s, and she begs to be released from the apparently new dream addition of Mr. Allen. He asks her, “What haven’t you tried?” It’s a fair bet to say that by the end of the show, we’ll find out.

Next we meet Jenny, having the coldest, cruelest conversation with herself in her vanity mirror, commanding herself to cry, to feel, something, anything. Leah Strasser is fantastic as Jenny — I’d love to see a whole play about this white collar criminal, who committed a litany of crimes and was eventually caught out and is currently on house arrest, replete with a monitoring ankle bracelet, at her sister Kate’s. Because, yes, the pair finally reconnected. It only took a potential prison/jail sentence and sixteen years to bring them together. But that’s kind of the point of a lot of the play — the duress under which family, and more specifically, sisters, are revealed to themselves is what makes any family unit tick. The girls’ father disowned Kate after she took Jenny in, and now the two are left faced with one another — and themselves.

The mirror on the vanity is a great metaphor for the way we look at ourselves but rarely dive deeper, and Kate and Jenny are great mirrors for one another. Kate sees Jenny’s VERY hidden goodness, Jenny recognizes Kate is apathetic, but that’s better than just being pathetic. The pair riff on what it means to be good, and why, and how, accompanied by a bit of harmonized singing and guitar strumming hearkening back to the good (pun mostly intended) ol’ days. And then there’s a knock at the door. It’s a private investigator, Max Patrick (Simon Powell,) who feels a bit superfluous as a character, and it becomes clear to us that while being good is an eventual goal, there is, indeed, one more bad thing to be done.

They’ve hired Max to investigate their former manager Mr. Allen, but they won’t budge when he implores to know the specifics, like, why, and it’s shrouded in an air of mystery that I think would have been better executed if we’d been given a bit more concrete evidence throughout the dream sequences or dialogue to understand. Ultimately, the girls blame Mr. Allen for his misdeeds of management — driving them too hard, instilling bad habits and virtues, leading them to their respective lives of agoraphobia and depression and crime and mild sociopathy — and want him…in jail? I think that’s the end goal, but honestly, it probably doesn’t matter.

What matters is their motivations, which take a dark, twisted turn when child sexual abuse is floated out by Jenny. At first, she alleges she was the one abused. Then, in what appears to be total honesty, she tells Kate that in fact, it was Kate who was abused, and was too young to remember, and if she does, she’s certainly repressed it all, and Jenny is doing this to help set that wrong right. If you’re asking me, which you are, because you’re reading this review, I believe Jenny. Her childhood logic behind abandoning Kate at the State Fair makes sense as she explains it in adulthood, and I’m inclined to forgive Jenny for her choices. Kate could be willing to do the same, but the play’s final twist seals the nail in the coffin of fate for these two sisters in a way neither of them probably ever thought would come to be.

Ultimately, “One More Bad Thing” is an intriguing character study, peppered with some great singing and committed acting by the two leads, that leaves the audience with a sudden desire to take a long, hard look in the mirror and see if they, too, wouldn’t make some of the same choices.

Leyla Shokoohe is a newly-returned college student, currently a senior at the University of Cincinnati in the Journalism program. She is an avid Cincinnati arts advocate and previously worked in marketing and communications for Cincinnati Ballet, Cincinnati Symphony Orchestra and ArtsWave. She is a freelance journalist for “CityBeat,” “Cincinnati Business Courier,” WCPO, “Movers and Makers,” and “Cincinnati Refined.” When she’s not doing homework or freelancing, she likes to dance with DANCEFIX, drink copious amounts of coffee, catch live music, and people-watch around the city.