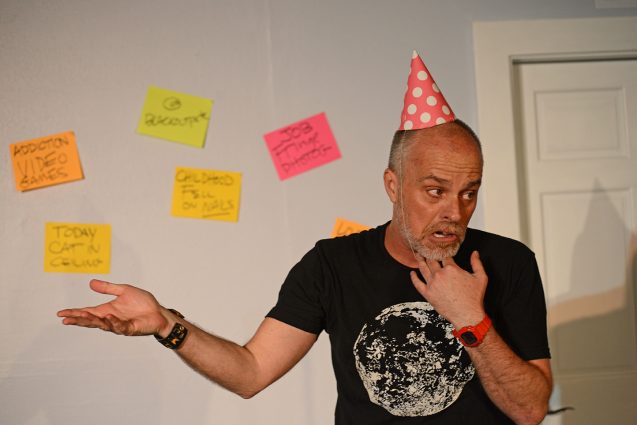 'Show Up' is an honest, up-front comedy about depression and trauma

In an unremarkable recreational room of a church, there is a wall that is covered with hastily scrawled words and phrases like “Family,” “Love Life,” and “Change” on brightly colored Post-It Notes. I was running…

In an unremarkable recreational room of a church, there is a wall that is covered with hastily scrawled words and phrases like “Family,” “Love Life,” and “Change” on brightly colored Post-It Notes. I was running a bit late and came in right before the doors closed, and found myself having to choose a seat that was either near the back and on the aisle or near the front row. Thinking it more polite, I took the back aisle seat. As it happens, that decision made a significant difference in the way I experienced the show.

“Show Up” is a self-aware one-man show about anxiety, depression, and trauma. Peter Michael Marino, literally reading from a script for much of the play, leads the audience through a discussion about dealing with the ups and downs in life through the medium of improvisational theater, seeking suggestions from the audience by asking for its members to volunteer personal information about themselves to form the narrative of the show. About half of the front row audience members were gradually given jobs like “Stage Manager,” “Sound Operator,” and “Prop Manager” that were crucial to the execution of the performance.

All of this work is in preparation for Marino to throw down his script and perform what could possibly be called a stereotype of a one-man show, guided by suggestions and stage direction from the audience. The result is an impressive, energetic performance of a hilarious narrative that is completely at the mercy of the audience. It was SO fun.

Marino reminds the audience of the famous quote “80% of success in life is showing up,” and it seems that this serves as the guiding metaphor for his show. He is open about his struggles with depression and anxiety throughout his life, and the trauma associated with that struggle. If there is a message to take away from “Show Up,” it’s that you have to face life every day, even if it seems difficult or intimidating to do that. I left the show feeling great, and I hope that you will, too.