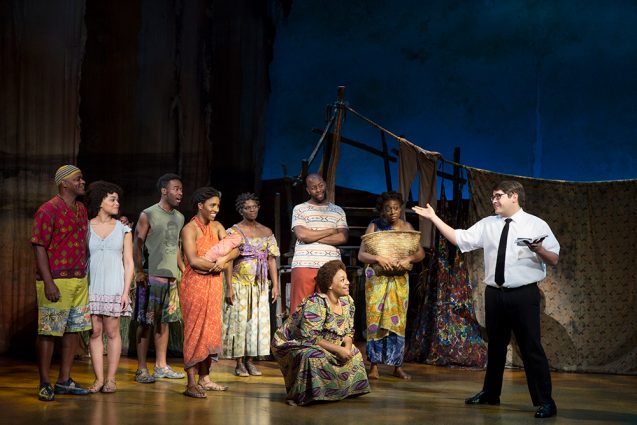 'The Book of Mormon' is top-notch irreverent comedy

When considering Broadway in Cincinnati's production of “The Book of Mormon” I entered the theater with admittedly limited information. I knew going in that it was one of the most successful musicals of all time (having…

When considering Broadway in Cincinnati’s production of “The Book of Mormon” I entered the theater with admittedly limited information. I knew going in that it was one of the most successful musicals of all time (having grossed over $500 million). I knew it was the brain-child of three incredibly creative minds; Robert Lopez (“Frozen,” “Coco”) and “South Park” co-creators Trey Parker and Matt Stone. I also knew from word of mouth that it was both critically and publicly beloved, and above all, funny and controversial. What more would you expect from the team running “South Park” for nearly 20 years, right? But at the same time, having one of the musicians behind contemporary Disney hits like “Frozen?” That is quite a dichotomy. Possibly as an homage to that dichotomy, it feels apt to break this review into two separate parts: first the performance and then the content.

From a production standpoint, it is the perfect example of “less is more.” There are, for most of the production, no large set pieces, and the settings are simply conveyed. However, what is on the stage is there for a specific purpose and is utilized to the greatest extent. The settings range from Salt Lake City to Uganda and even, at one point, Hell. But, like a true top-notch production, the settings were engrossing and more than adequate as to not overshadow the performances they enriched. The performances themselves were amazing, headed up by Kevin Clay as Elder Price and Conner Peirson as Elder Cunningham, the two leads and focal points of the story. When the story transitions to Uganda, Kayla Pecchioni stole the show as Nabulungi. The ensemble cast was phenomenal in their roles and with many of them portraying multiple roles that changed from scene to scene. Many of the musical numbers began as smaller, consisting of one or two characters, but swelled into a full ensemble performances with much of the cast involved.

So, let’s transition to the content piece now, for as successful and award-winning as the production may be, most of the word of mouth regarding this production revolves around one word: “controversial.” This is, after all, a musical centered upon and making light of the religious beliefs of millions of people worldwide. The production itself is certainly controversial, and if you are one inclined to offense, regardless of your religious beliefs, you are likely to be offended at least once during the show. But, true to form with regard to the social commentary displayed on “South Park,” Parker and Stone are trying to offend you, but they do so with the goal of sparking self-reflection and conversation. If you can get beyond the crass humor or veneer of mockery, there is a strong moral message in this production. This is a message of love, kindness, care for one another and the power of hope.

This isn’t to say that this production is “family-friendly” in any way; it most certainly is not. The language alone would remove it from that category, to say nothing of the content. But it does smack you in the face to get your attention when it comes to matters of faith, charity, and most of all, perceptions held by many throughout the world. I found myself enjoying the music and dance, then at times feeling offended about something that was shown or spoken. At those times, asked myself, “Why does this offend me?” I would recommend this production, but I would also recommend approaching it with the knowledge that it’s not all crass humor and faith-bashing. There’s a deeper dialogue to be had, and self-reflection is warranted to some extent, in order to have it. That is what was intended all along.

Joe Maurits is the Director of Enterprise Licensing with Western & Southern Financial Group. He is a Cincinnati native and has three children with his wife, Laura.