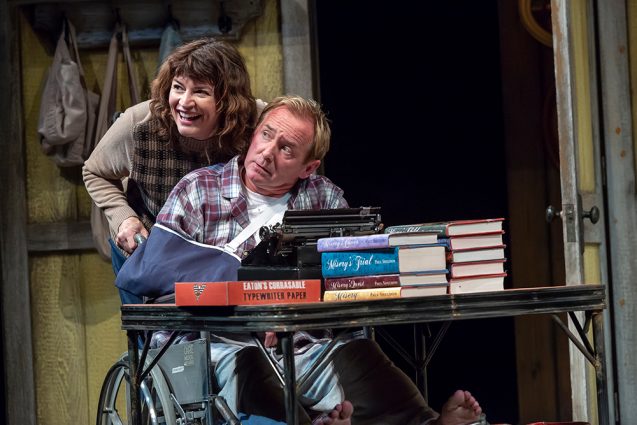 'Misery' is the story we love to make us nervous

If you haven’t seen Kathy Bates in the film version of Stephen King’s "Misery," I don’t know where you’ve been living. Playhouse in the Park's stage adaptation of the famous book/film is just as unnerving.…

If you haven’t seen Kathy Bates in the film version of Stephen King’s “Misery,” I don’t know where you’ve been living. Playhouse in the Park’s stage adaptation of the famous book/film is just as unnerving. Barbara Chisholm’s Annie Wilkes is a lightning strike about to happen, and David Whalen’s author Paul Sheldon is the epitome of reserved hatred. I sat in the second row and would find myself pushing backward in my seat, subconsciously trying to get out of range.

This review contains spoilers, though aside from my wife I don’t know anyone who doesn’t know what “Misery” is about.

Annie’s cheerfulness through the first act of the performance and Paul’s sideways glances led to a lot of laughs. One could almost, if they squinted hard and tilted their head, imagine it as a bit of a slapstick comedy. Until the sobering moment when Paul is forced to drink dirty water from a pail, you could almost think Annie is just a wacky nurse. Unfortunately for everyone, she’s so much more.

The set was a stunner, and it’s the one part of the play I don’t want to give away. The way they’ve managed to turn it into an entire house is something that needs to be experienced firsthand. It seems to me that the Playhouse gets bolder and more adventurous every year, owning their rightful place as a creative powerhouse. I was anxious and giddy as I sat, waiting for the play to start.

All of the famous parts of the story are there — including “the scene.” I can tell you that the appendages in question were extremely lifelike, and despite missing the second one on her first try, Annie makes quick work of her job. The audience laughed loudly, but nervously, some groaning in disgust. From my second-row seat, I could hardly tell they weren’t real.

I bought a tub of nonpareils to snack on during the play — for some reason the Playhouse sells these absurdly large servings of candy — and I was quietly eating one at a time. I didn’t want to disturb the people around me with chewing because the silences were so fraught and tense. The cast of three, Paul, Annie, and Buster (Kenneth Early), did a masterful job electrifying the air with their motives and means. Annie specifically exerts an otherworldly sense of vertigo while she controls the reality Paul must inhabit.

For anyone who is familiar with the movie or the book, the stage adaptation is a wonderful addition to the lore. I highly recommend it as a way to escape from the humdrum reality we all live in and experience true hell through the eyes of Paul Sheldon.

“Misery” runs September 7-29 at Cincinnati Playhouse in the Park.