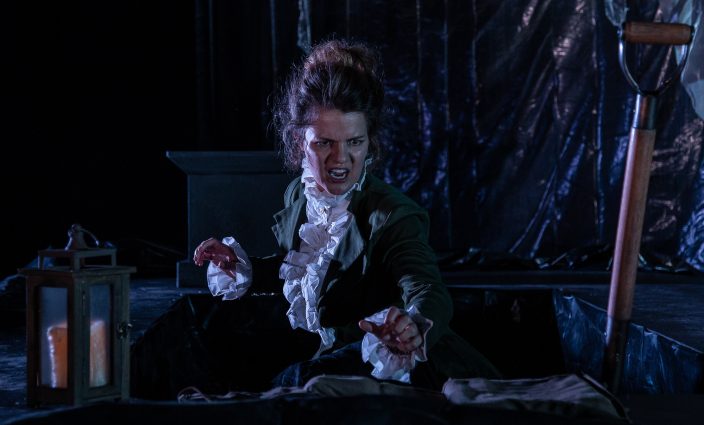 'Mary's Monster' is a gripping account of grief, terror and creation

The unmistakable shape of a grave serves as the centerpiece for the set of the one-woman show, "Mary's Monster." Tattered cloth hangs in the background, streaked with grime. At the head of the grave is…

The unmistakable shape of a grave serves as the centerpiece for the set of the one-woman show, “Mary’s Monster.” Tattered cloth hangs in the background, streaked with grime. At the head of the grave is a small monument. Inside is a shovel. Before the show even begins, these atmospheric trappings loom over you, reminding you where all of this is heading. If there’s a better way to kick off the Second Stage series of a season Know Theatre of Cincinnati is billing as “Fear Itself,” I haven’t seen it.

“Mary’s Monster” is the brain-child of writer and performer Maggie Lou Rader, whose recent contributions to local theater have been indispensable (Maggie in Cincinnati Shakespeare Company’s “Cat on a Hot Tin Roof” and the writer of “The Inventive Princess of Floralee,” to name a few). She plays Mary Wollstonecraft Shelley, best known as the author of “Frankenstein,” which is widely regarded as the world’s first science fiction novel. Rader’s dialogue is impeccable, weaving her own words and Shelley’s together into a stunning, often macabre tapestry. Her performance is resilient and emotionally exhausting. Loss after heartbreaking loss strikes, and Rader lassos the atmosphere of the space, steering its descent into anguish and fear.

At the beginning, despite the oppressive mood of the set, there is a sense of hope and energy — and it’s well-founded. Mary Shelley is the daughter of political philosopher William Godwin and Mary Wollstonecraft, who wrote one of the earliest works of feminist philosophy. Her intellectual and creative pedigree are strong, and her father nurtures her curiosity. When she meets Percy Shelley, she finds what appears to be an ideal match for her: someone who can both challenge her and incite her innate passion.

But Mary Shelley did not lead the most pleasant life. She lost three children, her mother, her husband and her sister well before their time. Grief can manifest as an emptiness or a haunting, and there is nothing empty about this production. This is, after all, the story of the woman who invented one of fiction’s most iconic monsters. So, without straying from the facts of Mary Shelley’s life, the show takes an interpretive turn into the uncanny and eldritch.

When Shelley realizes that death is haunting her, she’s not being metaphorical. She begins to see a grotesque apparition every time death is about to strike again, and there is nothing she can do to stop it. The way she describes her terror evokes a feeling that lies somewhere between hearing a competent retelling of a ghost story and waking up from a nightmare, not yet realizing that it was just a dream.

This show is, by turns, hopeful, heavy, horrifying and heartbreaking. It is demanding but rewarding to its audience, and it will linger in your mind. When the mother of monster fiction is haunted by something, you can be sure that she won’t keep it to herself. Do yourself a favor and experience it with her.