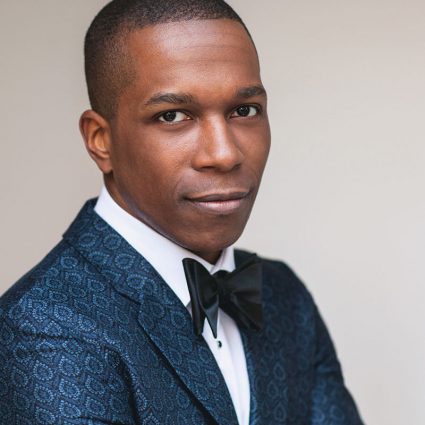 The Pops with Leslie Odom, Jr. is 'unforgettable in every way'

Tap. Tap. Tap. It's that magical sound that we all await when sitting riddled with anticipation in the majestic Cincinnati Music Hall, gazing towards a seeming endless array of red jackets that assure you that…

Tap. Tap. Tap. It’s that magical sound that we all await when sitting riddled with anticipation in the majestic Cincinnati Music Hall, gazing towards a seeming endless array of red jackets that assure you that the Cincinnati Pops Orchestra is about to kick off another spectacular concert. Tap. Tap. Tap. The sound that announces not only the arrival of the boundless energy and talent that is conductor John Morris Russell but also the signal that music will soon fill the hall and engage the audience from beginning to end. Last evening was no exception as the audience surged to its feet at the arrival of Leslie Odom, Jr., who was marking his debut performance with the Pops and is best known as the Tony Award-winning actor from Broadway’s wildly successful “Hamilton.”

Tap. Tap. Tap. Whether it was Russell’s baton or the click of Odom’s shoes as he crossed the stage, the self-proclaimed disciple of Nat King Cole elicited an ease and energy from the first note that took us all back to yesteryear. Wearing a striking blue suit that reinforced the channeling of “old blue eyes” and wowing the audience with his velvety-smooth voice, he took us back to a time when life moved a little slower, people connected a little more, and music, in all its varied forms, was our way of telling stories and expressing ourselves. Leslie Odom, Jr., you are a throwback from a bygone era in the best possible way and, in the words of Nat King Cole, “unforgettable in every way, and forever more, that’s how you’ll stay.”

We owe a huge debt of thanks to John Morris Russell, whose “boundless enthusiasm for music-making of all kinds” may only be matched by Leslie Odom, Jr. whom he met in Utah last year and convinced to join us this season. While many in the audience may have been less familiar with Odom (attending because it was the Pops or they heard it may involve songs from “Hamilton,” even if they had not seen it yet), that did not matter once he took the stage with his effortless charm and quick wit. His charisma as a performer engages you immediately and his voice makes you want to sit back, close your eyes and revel in whatever world he takes you to with each song. Leslie Odom, Jr.’s versatility as a singer, actor, dancer and writer is matched only by his taste in music which is best captured in a quote from Jasper Fforde: “I have a very varied taste in music. Everything from rap to classical to Latino to Rat Pack to jazz.” He can truly do it all and shares that by performing songs from “Hamilton,” “Rent,” “Spring Awakening” and so much more.

In concert with his jazz quintet of outstanding musicians in their own right (guitarist, drummer, percussionist, bassist and pianist) and with a sincere appreciation for the talent of our very own CSO Pops, Odom gives credit to the endless hours of practice that musicians endure to bring such musical joy to the rest of us. He is the epitome of hard work, believing in yourself and doing it all with a sense of humor. It also does not hurt that he is unbelievably talented. While the entire concert was exceptional, there were moments that will stay with me for quite some time to come. His rendition of “Auld Lang Syne” was beautiful and literally took us back to the good old times. His invitation to Paul Patterson, Pops violinist, to perform with him was delightful and their mutual joy of music-making was evident in every note. And his engagement of the audience during the “Hidey Ho” song originally by Cab Calloway and performed by “Minnie the Mooch,” left us all smiling and energized. Each and every “Hamilton” song was exhilarating, but his closer “Without You” from “Rent” and Frank Wildhorn’s “Sarah” were absolute show-stoppers, as his voice alone took the stage and confirmed once and for all that Leslie Odom, Jr. is utterly unforgettable.

He has two more performances with the Pops this weekend, so get your tickets now. You do not have to be familiar with all his work to appreciate every bit of what he brings to his performances. And while you are there, take a look at the rest of the Pops 2018-19 Season, as it looks to be an extraordinary line-up that will keep us all entertained.