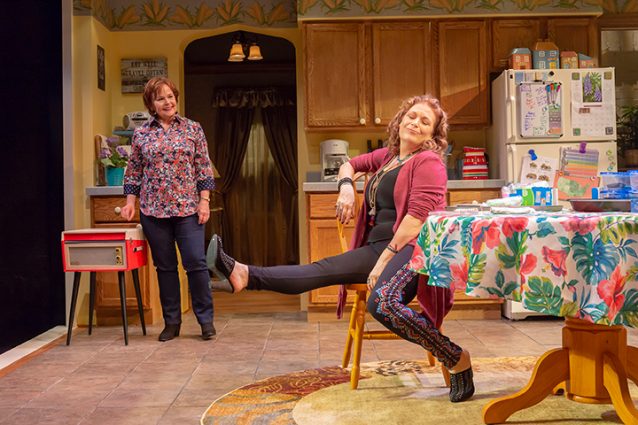 'The Roommate' shows us the secret lives of moms

Living with a roommate is, in many ways, nearly the same as being married to someone. You learn people’s private routines, their eating habits, their sleeping habits, and sometimes the myriad illegal schemes they were…

Living with a roommate is, in many ways, nearly the same as being married to someone. You learn people’s private routines, their eating habits, their sleeping habits, and sometimes the myriad illegal schemes they were involved in before they crossed your doorstep. Proximity to others, nearness, helps us to examine our own humanity through the lens of those others. No matter who one may be looking at up close, there is always a funhouse-mirror reflection of self peering back.

So we find “The Roommate,” Jen Silverman’s play showing at Playhouse in the Park through October 21 in the Shelterhouse. The two characters are Sharon (Margaret Daly) and Robyn (Mary Jo Mecca). The audience sits around the periphery of Sharon’s kitchen in Iowa, a scene of idyllic domesticity that sees what is likely to be its first legitimate excitement since the linoleum was tacked down the day is was built.

Hippie/biker/free spirit Robyn shows up responding to an ad for a roommate at the home of the recently divorced ex-housewife Sharon. Not unexpectedly, the two women are nothing alike in pasts, dispositions, hairstyles or drugs of choice. Sharon has spent an Iowan life of mothering and simplicity, and is now an anxious empty-nester. Robyn has a checkered, intriguing past springing from the Bronx and landing her in middle America. The performance takes us on a journey of personal discovery for both women that elicits hearty laughter throughout.

A poignant part for me was Sharon’s relationship with her son, who is living his life in New York City and doesn’t seem to have time for his mother. For some reason, it left me with a desire to call my mom just to say hello. Do moms really stress over their sons so much? Who knew?

As past secrets are revealed and Sharon becomes enamored of the lifestyle of Robyn, the play takes a sharp turn. Unlike classic tales of temptations and refusals, Sharon dives right into the deep end: running scams, selling pot, mugging a balding online date. In the mirror held up by Sharon for Robyn to see her own self, and her past mistakes threatening to derail her again, she digs for her own resolve to truly change.

Overall, “The Roommate” is an engaging and entertaining performance. Despite the token audience sleeper who happened to be right next to me, the crowd was lit up and laughing along. I’d see it again, for sure.