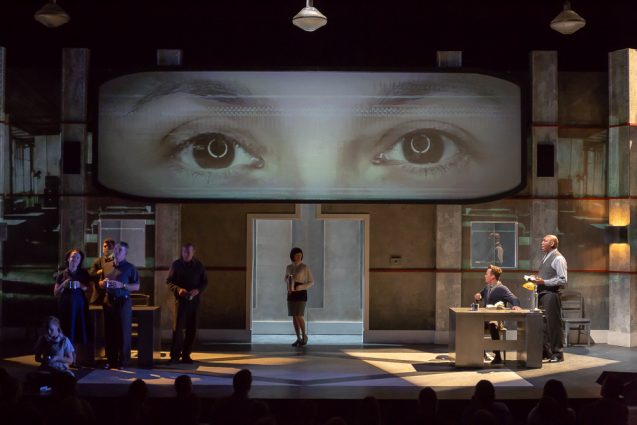 '1984' is a stunning, beautiful, heartbreaking nightmare

The opening number of "A Funny Thing Happened on the Way to the Forum" promises "Tragedy tomorrow, comedy tonight." They weren't kidding. Cincinnati Shakespeare Company is following up their hilarious production of that classic comedy…

The opening number of “A Funny Thing Happened on the Way to the Forum” promises “Tragedy tomorrow, comedy tonight.” They weren’t kidding. Cincinnati Shakespeare Company is following up their hilarious production of that classic comedy with an adaptation of George Orwell’s groundbreaking novel, “1984,” in which free will has been all but eradicated by an oppressive police state.

George Orwell wrote “1984” as he observed the recent collapse of a fascist dictatorship in Nazi Germany and the ongoing rise of Stalin’s repressive Soviet Union to the status of superpower. The political system he conceived, IngSoc, bears more than a passing similarity to the Nazi party (“Nazi” is an abbreviation of “National Socialism” where “IngSoc” is an abbreviation of “English Socialism”). There are also echoes of Russian history, with a Party insider turned enemy of the state denouncing his former colleagues à la Leon Trotsky’s “The Revolution Betrayed.”

This production, a new adaptation, is about as unforgiving as theater gets. The party uses fear and disorientation to maintain absolute control over the populace of Oceania (implied to be the British Isles and the Americas, though the action all takes place in London), and the same principle is applied to maintain a grip over the audience. The set is bare, concrete and brutalist. Constant surveillance is suggested through a prevalent screen above center stage. Stunning light projections flesh out the set, provided by the incomparable Brave Berlin. The sound design is unabashedly loud and invasive, sometimes erupting into a cacophony without warning. It’s enough to keep you constantly on edge, even if you opt to wear the complimentary ear plugs provided at the doors.

The story begins with a series of intentionally confusing micro-scenes, some of which are repeated, which seem to bleed into one another. You’re not quite sure what you’re witnessing for the first five to ten minutes of the show, which neatly underscores how the Party keeps its populace under such tight control — history and language itself are constantly rewritten in an attempt to muddle any memory or perception of objective truth, so that everyone is in a constant state of confusion. Since any attempt to remember objectivity is considered “thoughtcrime,” it’s infinitely easier to keep your head down and behave as you’re expected to behave. From such ideas are nightmares born.

Justin McCombs steps into the role of Winston Smith, a man who has secretly purchased a journal and begun writing in it. He secretly despises the Party and everything about the world he lives in. McCombs, typically cast as the comic relief, seizes this opportunity to shine. He begins meekly, but hungry for rebellion. He finds a kindred hunger in Julia (played with characteristic precision by Sara Clark), and the two of them find new ways to score small victories over the Party — mostly through love, both the physical act and the idea of cherishing something that is not Big Brother. Through O’Brien, a Party insider (a note-perfect performance by Jeremy Dubin), they find an in-road to what appears to be a wider rebellion, and maybe even a way to destroy the Party and bring back some semblance of freedom. Winston’s story takes him to the peak of desperate hope and the deepest depths of fear and despair. McCombs proves completely up to the task.

“1984” is deeply disturbing, the extent to which is summed up nicely with the line, “If you want a picture of the future, imagine a boot stamping on a human face — for ever.” With Halloween approaching, you may be tempted to look to slasher flicks or the occult. If you want to experience genuine fear — the kind of fear that you can only hope is unrealistic, though a nagging, pessimistic voice in the back of your head whispers that there are kernels of truth in front of you — look no further than this production, running through November 3 at Cincinnati Shakespeare Company’s Otto M. Budig Theater.