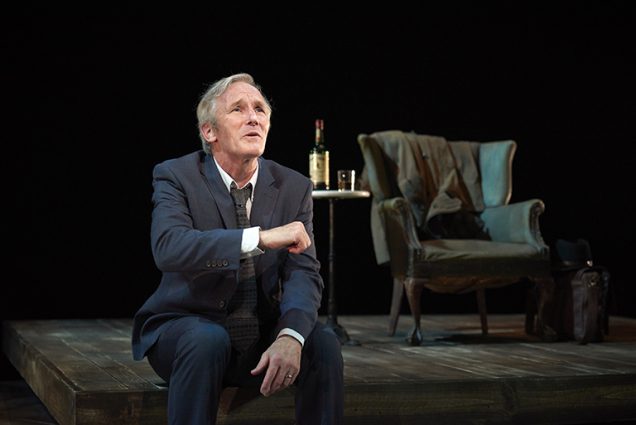 'St. Nicholas' is a pair of immersive stories

A good monologue is a feat. The oldest human method of transferring information is storytelling — we’ve been doing it for thousands of years. Before the printing press, before Twitter, before bathroom stall graffiti, we…

A good monologue is a feat. The oldest human method of transferring information is storytelling — we’ve been doing it for thousands of years. Before the printing press, before Twitter, before bathroom stall graffiti, we had stories. Ensemble Theatre Cincinnati‘s  “St. Nicholas,” the one-man show written by Conor McPherson, is one heck of a long story. With two parts running about 45 minutes each, punctuated by an intermission, we are taken on a very peculiar journey via the spoken word.

Like most monologues you may have seen, the set is minimal. A chair, a low wall, a lamppost, a bottle of scotch, and a single actor: Bruce Cromer. If the name sounds familiar it’s likely because you’ve seen him as Ebenezer Scrooge at Playhouse in the Park. In this performance, however, he’s the sole focus, the storyteller. His Irish lilt takes us from Dublin to London and myriad dark places in between. It’s equal parts a harsh retrospective on one man’s own life and a cautionary tale about how our lives and relationships can get away from us.

Cromer commands the simple stage with alacrity. He’s pacing around like a man of nerves, with the confidence that I can only assume comes from years performing. He’s as believable as a stage actor can be, and after leaving the performance I felt genuinely privileged to have seen it. The collaboration between director Brian Robertson and Cromer is well-matched.

An interesting storytelling device in St. Nicholas isn’t in the form of spoken word, but in the costume changes. They are subtle — just changing suit jackets a few times — but effective. They allow Cromer to portray himself at different stages as a different sort of man on a journey. The up-and-coming local costume designer, Stormie Mac, displays a creative touch through the subtlety. The red pocket square in the second part is particularly meaningful, as you’ll see if you attend.

Aside from the patron ravenously digging into a Planter’s Peanut single-serve snack behind me for the first 10 minutes, I was fully wrapped around Cromer’s finger. I could see what he saw, feel what he felt, and generally believed I was being told a story from a place of truth. The tale takes a supernatural turn in the second half, but still remains firmly believable, and that’s by design. The Man takes care to break down what we believe as impossible and lays it at our feet to decide for ourselves. I think I looked over my shoulder my entire walk home in the dark.

Note to Ensemble: sell concession items in wide-mouth containers so audience members aren’t yelling at each other in the middle of a performance about legume consumption.

This production is on a limited run of just about two weeks, closing October 27. It’s not part of the regular Ensemble season, which looks to be another home run. I highly recommend taking the time to come down and see it — if for nothing else than to see Scrooge as another kind of anti-hero. You’ll be begging to see redemption for the narrator, and I’ll let you find out if he gets it.