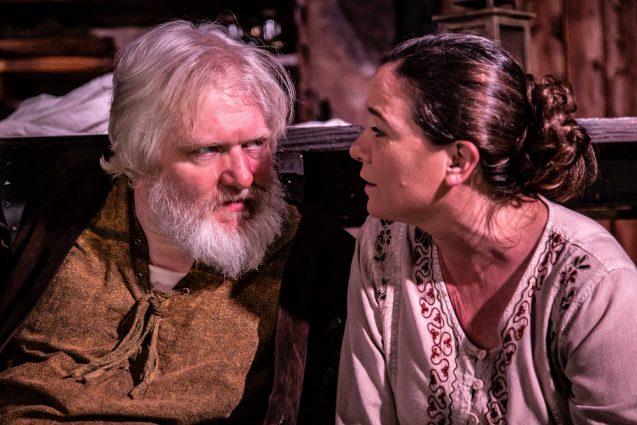 Know Theatre works their thrilling magic on 'The Man-Beast'

In 18th-century France, an animal known as the Beast of Gévaudan began a reign of terror in the French countryside. It was said to resemble a wolf the size of a calf and was estimated to…

In 18th-century France, an animal known as the Beast of Gévaudan began a reign of terror in the French countryside. It was said to resemble a wolf the size of a calf and was estimated to be responsible for over a hundred deaths and severe injuries. The French government expended considerable resources in hunting the creature, which seemed to possess a mysterious resistance to bullets. Many of the people of Gévaudan believed this mysterious beast was the legendary loup-garou — a werewolf. In fact, much of the mythology surrounding werewolves have their origin in the story of the Beast of Gévaudan. Those legends form the basis of Joseph Zettelmaier’s “The Man-Beast,” which opens this weekend at Know Theatre of Cincinnati.

Zettelmaier is something of a mainstay at Know Theatre, having written two recent productions there: “Pulp” and “All Childish Things.” In “The Man-Beast,” using only two characters, he has crafted an absolute masterpiece of atmospheric storytelling. The play begins with Jean Chastel (portrayed with a delicious, egotistical gruffness by Jim Hopkins) bursting into a secluded cottage in the woods, a fresh animal bite on his arm. His pain and panic are palpable as he searches for alcohol to clean the wound and some way to wrap it. Then the owner of the cottage arrives. Jennifer Joplin plays Virginie, an outcast from Gévaudan who is rumored to be a witch, though she maintains that she merely “knows a thing about a thing.” Joplin’s powerful performance evokes a sense of loneliness that is underscored by a deep, fierce strength. Almost before she speaks, you can tell that Virginie is not to be trifled with. Her immediate reaction to Chastel’s presence is to point a musket at him, deduce who he is, why he’s there, even what animal bit him, then begrudgingly agree to treat him — for a price.

Chastel and Virginie both live on the fringes of society, having never found a way to fit in. Chastel makes his living as a lone hunter, while Virginie uses her skills as a healer and, primarily, an extraordinary taxidermist. As the chemistry between them turns from antagonism to affinity and attraction, the two hatch a plan. Jean Chastel was bitten, he says, by the legendary Beast of Gévaudan, which he was certain he had shot in the process. In the weeks that follow, there are no further attacks, so he is convinced that he has slain it — a feat for which King Louis XV has offered a handsome reward. To prove it, he needs a body, which is not only missing but probably picked clean by now. Virginie, he reasons, could use her skill (and a mysterious animal’s corpse he can provide) to create a terrifying monstrosity that can fit the bill. After some negotiation, the two agree to the plan, though Virginie pointedly warns Chastel not to betray her and asks him to swear a brief but unnerving ceremonial oath.

As they begin their work, questions remain. Is Virginie’s art, the best in a backwater forest province, truly good enough to fool a king? Is Jean as reliable as he claims? Was there some dark magic behind the oath they swore? Perhaps most importantly: Is the Beast really dead? And what are the consequences if it still lives? All of these and more are answered in due time, leading to an absolutely stunning conclusion. Zettelmaier’s script is a near-perfect exercise in long-term tension building. Every moment, from the very first to the visceral climax, fits neatly into the elevation, giving you a feeling like you’re climbing the first hill of a roller coaster, then suspending you for the barest instant at the pinnacle of the hill before dropping you completely into the action.

None of this would have been quite so powerful without the breathtaking transformation that Know Theatre’s Underground stage underwent for this production. What was once a modest platform in the corner has become a full-scale French hunting lodge, with firewood, animal trophies and rustic lanterns. A larder is hidden behind an opaque window, through which you can glimpse the silhouette of fresh kills and a hint of Virginie’s work before she reveals it. The door is made of distressed wood with exaggerated gaps between the planks that sometimes trick your eye into seeing movement. So much of the set seems to be there just to make you wonder at what frightening things may happen, and the resulting sense of foreboding is perfect for this production.

The Know has a reputation for exciting, inventive theater precisely because of shows like “The Man-Beast.” They’ve taken an excellent, challenging script and worked their magic on it to build something truly special. As unnerving as it gets, the ending — which I won’t give away — was one of the most satisfying I’ve seen in recent memory.

“The Man-Beast” is an absolute must-see. You have until November 10 to catch it.