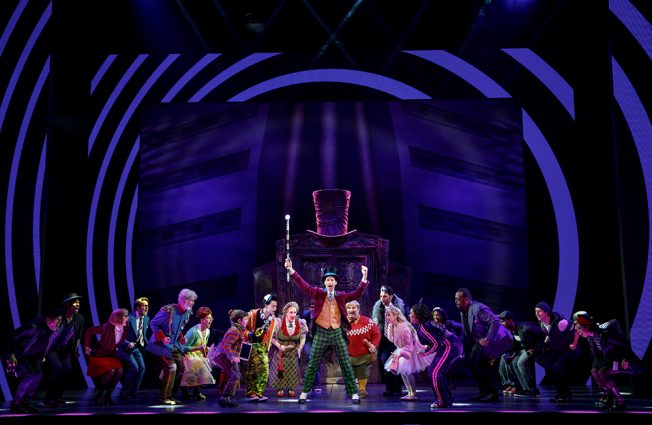 'Tis the season for sweet treats and spooky tricks. Broadway in Cincinnati's "Charlie and The Chocolate Factory" delivers both in a seasonal smash hit that revives Roald Dahl children's classic and takes its cue from…

‘Tis the season for sweet treats and spooky tricks. Broadway in Cincinnati’s “Charlie and The Chocolate Factory” delivers both in a seasonal smash hit that revives Roald Dahl children’s classic and takes its cue from the 2005 Tim Burton film version. The nostalgic musical intro and clever, colorful set design may imply that it is a simple remake of the original, but this musical, with book by David Greig and music by Marc Shaiman, takes the moral story of vice versus virtue delivering their “just desserts” to another level entirely. It strikes the same singular balance that Willy Wonka himself seems to teeter upon, delighting us throughout with a cornucopia of pure imagination for the senses while delivering unexpected thrills that reflect the slightly darker aspects of the source material. It is, quite simply, the perfect Halloween “treat” (and trick) for children of all ages.

The total cast is outstanding in this production, showcasing diversity and talent in every scene to deliver a variety show of outlandish outfits, personalities and performances. Noah Weisberg successfully delivers the role of Willy Wonka with a dialed up energy versus the beloved Gene Wilder original, relishing the opportunity to deliver tongue-in-cheek double entendre and nailing the snarky sarcasm. Fully embracing the rather horrific personalities of their characters, each of the children are played to perfection by their respective cast members, ensuring the audience either fully despises or adores them accordingly. With a head nod to modern day globalization, these characters showcase their unique abilities with Augustus Gloop grotesquely yodeling, Veruca Salt stunning with her astonishing ballerina skills and sheer nastiness, Violet Beauregarde hip hopping her way across the stage with her velvet toned voice reinforced by her violet velour track suit (quite a sight!), and Mike Teavee acrobatically accomplishing much more than your usual couch potato. But it is Charlie, played by the only true child, who steals our heart (as he is supposed to) with an infectious energy and endearing sweetness that surpasses the plethora of actual sweets at our disposal throughout the show. That said, the grandparents were my personal favorite, both for their “old people” diabolical humor and for when my 8-year old leaned over in the first bedroom scene and asked the age old question “Umm…if they have been in that bed for 40 years, how are they going to the bathroom?!” Well, the show doesn’t answer that question, but it does deliver fabulous vocal, dance and acting performances.

But the real star of the show is the imaginative and creative use of lights, mechanics, props and stage magic to deliver the wonky world of the chocolate factory and trick us with unexpectedly devilish moments that quite often left the audience with gaping mouths and oh-so-many questions. I strongly recommend that you see the movie and/or read the book before you attend this musical; your appreciation for these aspects of the show will increase tenfold. The Oompa Loompas are a snickering delight for everyone, even for those who spot the mechanics. Replicating the critical moments of the movie on stage, such as blowing up like a blueberry (for which my younger one leaned over and whispered frantically “how are they going to do this?!”) and shrinking small enough to fit into a TV screen, is no small feat and this musical manages to deliver on that magic. There are some scenes that go above and beyond, taking us into the darker aspects of Dahl and Burton’s vision, but I’ll leave that for you to experience firsthand (hint: If you didn’t like squirrels before you came into the theater, this show will not change your opinion). Each scene was supported by outstanding music, emphasizing key moments without detracting from the scene itself. My 11-year old daughter, who is very much into the dystopian book phase, was beyond excited that the vision of the factory doors was seemingly accompanied by the Hunger Games music. Accurate or not, it is a rather apt description of the underlying story of children vying for a grand prize and meeting their demise along the way. Regardless, it made for an extremely entertaining evening to experience the show from multiple perspectives.

Ultimately, the clever dialogue — including shout-outs to “The Lion King” and “Wicked” indicting a clear appreciation of its genre — and touching moments are what we take home with us long after the lights go down. Mrs. Bucket dancing with the ghost of Charlie’s father and Charlie wrapping his arm around Willy Wonka at the end are beautiful manifestations of Roald Dahl’s genius at capturing the tenuous balance of human strength and fragility. Crediting the beauty of the namesake song “Pure Imagination,” that is exactly what this production delivers from start to finish. So, to steal a line from Wonka himself, “We must hesitate without delay,” or, “Strike that…reverse it.” Don’t delay or hesitate to see this show! It is showing at the Aronoff Center between now and November 4, and will be a perfect fit to your spooktacular plans.

Know Before You Go: There are some darker scenes that may have some disturbing concepts for younger children, accompanied by louder music and flashing lights. Additionally, there is some mild adult language.