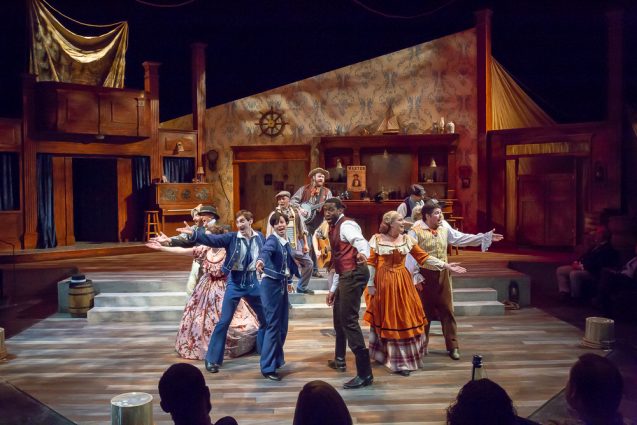 Shakespeare goes wild in the West with 'Twelfth Night'

In the Old West, Cincinnati Shakespeare Company has struck gold. They’ve unearthed a hilarious new interpretation of Shakespeare’s “Twelfth Night” in the style of 1850s San Francisco. Scenic designer Vince Salpietro and costume designer Clara Jean Kelly have created a stunning window into a bygone era. The on-stage bar is particularly impressive in that it actually functioned before the show and during intermission — special thanks to Jeremy Dubin for slinging drinks.

“Twelfth Night” begins as twins Viola (Caitlin McWethy) and Sebastian (Patrick Earl Phillips) are separated in a shipwreck. Both believe the other has drowned, but both are rescued. We follow Viola for the most part as she disguises herself, becoming a young man named Cesario, and enters the service of the local Duke Orsino. Orsino is in love with local lady Olivia (Abby Lee), who refuses to entertain any suitors until she has spent seven full years grieving for her lost father and brother.

Orsino sends his new servant to woo the lady on his behalf. Slightly complicating this plan is the fact that the duke, portrayed by William Oliver Watkins, is a singular work of art — a perfectly sculpted Adonis — and Viola has, shall we say, taken notice. Meanwhile, Olivia finds “Cesario’s” youthful persistence more than a little charming and falls precipitously in love with him/her. While all this is going on, members of Olivia’s household who are prone to revelry weave an intricate plot to discredit the stern, severe and pompous steward Malvolio (Barry Mulholland). All standard Shakespearean fare.

And then there’s the music. Shakespeare wrote a wealth of lyrics for this play. It is, after all, the source of the famous line, “If music be the food of love, play on.” It is Cary Davenport, though, who brings them to life. Davenport composed the accompanying music and leads a small musical ensemble throughout the production. From the bawdy singalongs to the piercing notes of lovesickness, Davenport’s work is uniformly outstanding. The music may be, fittingly, the star of the show.

“Twelfth Night” meets the excellent standards we’ve come to expect of Cincinnati Shakespeare Company, especially in their new theater space. The set is a stunner, the music is wonderful, the cast has impeccable comedic timing and everything feels as though the company has done just a little bit extra. This year, I give thanks for great theater, and Cincinnati Shakespeare Company seems happy to oblige again and again. Catch this gem from now to December 8.