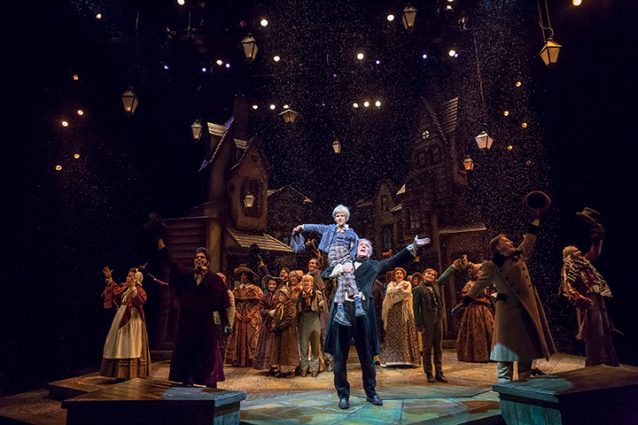 The cast of Cincinnati Playhouse in the Park’s production of "A Christmas Carol"
Photo credit: Mikki Schaffner Photography

This review is particularly hard for a native Cincinnatian to write. Because who hasn’t seen this hometown staple? From the likelihood that it’s a family tradition to the anticipation of this year’s Tiny Tim, if you’re…

This review is particularly hard for a native Cincinnatian to write. Because who hasn’t seen this hometown staple? From the likelihood that it’s a family tradition to the anticipation of this year’s Tiny Tim, if you’re from this town, you’re familiar. With that in mind, I’ll pretend you’ve never heard of it. Otherwise, I’d just save you the trouble of reading 600 words and post the link to tickets.

Cincinnati Playhouse in the Park’s “A Christmas Carol” is the stage adaptation of the Charles Dickens’ novella, first published in 1843. This timeless work — and I assume 175 years of steady use qualifies a work as timeless — centers on the moral reckoning of one Ebenezer Scrooge. Like Scrooge himself, we are taken on a journey through time. We come to understand how a boy full of hope becomes a young man full of promise, and then an old man full of hate.

Ah, Christmas! Scrooge’s story is oddly reminiscent of Darth Vader’s character arc in “Star Wars.” I wonder if Dickens was a fan…

As he has done for the past 14 seasons, actor Bruce Cromer brings the humbugging Ebenezer Scrooge to life. He is countered by the effervescent and optimistic Bob Cratchit (Ryan Wesley Gilreath). The joy of this story — and what we all so desperately need — is the redemption of the man on the precipice of damnation. We witness the thorough cleansing of a tainted soul. The smattering of sniffles in the audience puts proof to the emotional ride the cast and crew take us on.

Like most productions at Playhouse, “A Christmas Carol” has a set that prompts the oohs and the aahs. Trap doors open to bring out a giant feast or a grave or a one-eyed homeless peddler. Scrooge’s giant four-post bed slides back and forth like a Victorian amusement ride. A time-lapse video on screens in the lobby show the herculean effort that goes into building the ingenious set.

On opening night, there was one snafu which I had never witnessed in a production before. Not long into the first act, a voice came over the intercom stopping the production and we stepped back to the beginning of the scene. Apparently the set wasn’t correctly oriented and a hole was left open in the ground. It was pretty fascinating to watch them do it ad hoc. None of the cast missed a beat. It had me contemplating just how many moving parts there are in a major performance like this, and how well they run 99.9% of the time.

I’m just glad no one fell down into the bottomless pit below the stage.

During intermission, I heard the man behind me say that this was his 25th year in a row coming to the performance. For a quarter of a century this man has made seeing “A Christmas Carol” at Playhouse part of his holiday tradition. I wondered how many others in the audience had similar stories. I know that as a young boy we always made the trip up the hill. And now that I have a little one, I hope to do the same for her. That I get to write about it makes it all the more magical.

There’s an irresistible quality to a tale of redemption. Personally, I like to see that there is hope for the human condition — that we can turn things around. If nothing else, the holiday season has us all looking for a little bit of hope and a little bit of promise. Especially in these toxic times, getting in touch with our humanity is one non-partisan issue we can all agree on.

Pick up tickets today and go see what making amends is all about. Now through December 29, 2018.