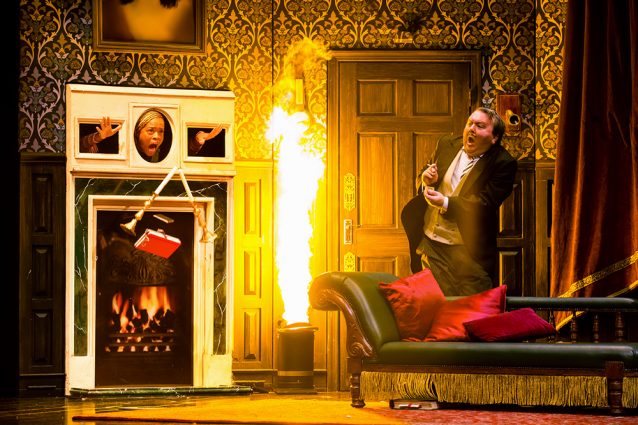 Everything falls apart just right in 'The Play That Goes Wrong'

I had never heard of "The Play That Goes Wrong" before. I assumed Broadway in Cincinnati's latest production was about people forgetting their lines, emergencies preventing the performance from taking place and so on. Never…

I had never heard of “The Play That Goes Wrong” before. I assumed Broadway in Cincinnati’s latest production was about people forgetting their lines, emergencies preventing the performance from taking place and so on. Never did I imagine that it meant stage décor falling, actors swinging from stage lights, and a floor falling what looked to be ten feet. To give you a better sense of what I mean, a woman I met in the audience, who attended this performance years ago, said there is a real doctor backstage in case anyone gets hurt.

As I arrived at the Aronoff, there were people mingling all around and I debated finding my seat, putting my coat and scarf there and grabbing a drink, or getting a drink first, then making my way to my seat to do a weird juggle to get my coat off while holding my drink. Mid-debate, I saw a man standing in boots, ash black jeans, a black t-shirt with cut off sleeves and bracelets with spikes. He looked out of place. So out of place I smoothed my own hair down to make sure I looked like I was supposed to be there.

Next, a woman in a gray jumper came running through the lobby and up the stairs toward balcony seating. At this point, I skipped the drink and found my seat. I settled in and the girl in the gray jumper brought an audience member on stage to help with a fallen mantel piece. From the side of the stage came the man in the ash black jeans. He took the audience member’s free hand and used it to hold a stage door shut. Both actors left the audience member there alone. Finally, they came back with tape and the sent him back to his seat with a round of applause.

The play itself begins with the Director (Evan Alexander Smith) telling us how his productions are always coming up short, but “The Murder at Haversham Manor” is supposed to be the best one yet. What he failed to mention is that he is also a comedian and took jabs at the audience by joking of how long we all waited for “Hamilton” tickets, or how we could be in a more enjoyable place — like Cleveland. The punchlines were non-stop. I’m sure I missed several because I was laughing so hard. It’s like when your mom says, “Not everything is a joke.” Well, in this play, it is!

Now envision a stage where unlocked doors aren’t opening, secured curtains are falling, props are missing and there is a thin line between dramatic and bad acting. In the middle of that vision, add a dead man: Charles Haversham (Yaegel T. Welch), who is very much alive and breathing.

As the cast moves around him, mourning his death and searching for clues, the detective orders his body to be taken to the study for examination. Charles is placed on the stretcher but falls straight through to the ground! Instead of his brother and brother-in-law picking him up and carrying him to the study, they leave him on the ground, continue their lines and walk right off the stage. Charles is left to do a slinky army crawl off the stage. This sends the audience into a roaring laughter. So much that you couldn’t hear the lines coming next.

Things like this continue throughout the play. Florence, the heartbroken fiancé of Charles played by Blair Baker, is knocked out a total of three times during the play. The stage director, Annie (Angela Grovey), has to take her place, reading the lines directly from the script. When Florence finally comes to — for the fourth time — Annie is not ready to give up her spotlight, and the battle is on. It’s the type of battle that makes you want to stand over your opponent and yell to onlookers “Are you not entertained?”

The play moves along, and nothing continues to go right. Lines are repeated, what is supposed to be a drink of whiskey turns out to be paint thinner, dead people move from room to room, the sound operator plays the wrong music on the wrong cues and a magic trick is performed where a woman pops out of a clock. This play is nothing short of hilarious, with shocking stunts to the point that you forget they really are trying to perform a story with a beginning, middle and end. I left the theater with tears in my eyes from laughing so hard, wanting to see more.

Marissa Staples is a Cincinnati published author and writer for The Voice of Black Cincinnati. She developed her love of arts from her mother, Kandi. Being a native of Cincinnati, she loves to travel. If she is not traveling, you can find her reading, writing, volunteering or drinking wine. Wine always brings smiles, friends and creative dialogue.

broadway in cincinnati, comedy, The Play That Goes Wrong, theater