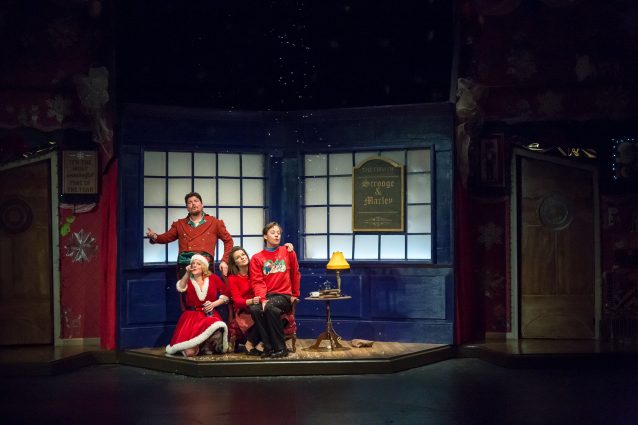 The cast of "Every Christmas Story Ever Told (and Then Some!)" at Cincinnati Shakespeare Company
Photo credit: Mikki Schaffner Photography

Cincinnati Shakespeare Company is well known for its fast-paced, quick-witted, and humor-filled productions brought to life by clever writers, a talented cast and a theater designed to embrace the audience. For anyone who has attended…

Cincinnati Shakespeare Company is well known for its fast-paced, quick-witted, and humor-filled productions brought to life by clever writers, a talented cast and a theater designed to embrace the audience. For anyone who has attended their shows, you know that these aspects are both a right and a privilege. If you have not attended a show, then get thee to the theater! However, my familiarity with Cincy Shakes aside, nothing quite prepared me for the side-holding hilarity and never-ending holiday cheer that Cincy Shakes delivers in “Every Christmas Story Ever Told (and Then Some!)” Interweaving every classic and not-so-classic holiday show that you can possibly name (barring “Die Hard” and “Lethal Weapon” — both of which were suggested by the audience), this show takes you on a nice and naughty, fever-pitched holiday journey that will surprise and delight you, even as you Fa La La La Laugh your way through the performance.

Written by the talented trio Michael Carleton, James FitzGerald and John K. Alvarez, this show was clearly created with love, laughter and liquor (in the best possible way). The latter plays a recurring role in the show and invites the audience to let loose this holiday season and join Santa and her elves for some well deserved holiday cheer, and maybe a martini or three! Directed by Jeremy Dubin, the non-stop physicality of the show coupled with intricately woven dialogue, encourages the audience to be fully present throughout. You do not want to miss a single line nor facial expression, each intentionally crafted to make you smile. And while you will enjoy the show no matter your level of holiday show and pop culture acuity, for those who have forgone a huge portion of their life watching the multitude of holiday shows represented and are up to speed with modern day culture (social, political and beyond), this show will tickle your funny bone and make you feel smarter than the average bear. As with any CSC show, where every seat in the house is less than 20 feet from the stage, one should be prepared to join in the antics at the request or demand of the cast, generally resulting in kudos for being a good sport and your embrace of 233 new best friends. When in Rome!

Ultimately, it is the unbelievably talented cast who make this show a must-see event and one that will likely become part of your holiday traditions going forward. Kicking off the evening in the lobby ahead of time is Fosters-swigging, hiccuping and giggling Santa, brought to life so well by Miranda McGee that if this is not the real Santa, than I’m not sure we want to find out who is! Leveraging her Australian accent and hilarious timing, she delivers the funny-bone of the show from start to finish. But her three elves are magical in their own right, delivering the majority of the physical and verbal work with a rollicking and riveting performance. Maggie Lou Rader, Billy Chace and the always-fantastic Justin McCombs partner seamlessly to showcase their singing chops, comedic timing and physical prowess. Clearly delighting in the humor themselves, their performances are infectious even when nary a word is spoken.

Jumping from Scrooge to Banksy, Rudolph (sorry, I mean Gustav) to global warming, and Cindy Lou Who to “The Golden Girls,” no one is left out of this holiday extravaganza that reminds us that being “wrong is all kinds of right.” For those lucky enough to have seen CSC’s “The Complete Works of William Shakespeare (Abridged)”, this show follows the same delightful approach (and brings back fan-favorites Miranda and Justin), delivering zingers right and left while sneaking in small moments of sobriety that remind you of the importance of the holiday using the immortal words of Charlie Brown’s Linus. The “A Christmas Carol” and “It’s a Wonderful Life” mash-up is especially well done, showcasing the similarities and underlying holiday sentiment. So, grab your best ugly sweater and buckle up in your sleigh (maybe leave the eight tiny reindeer at home) to experience a show not to be missed this or any other holiday season. “Every Christmas Story Ever Told (and Then Some!)” is playing now through December 30 at The Otto M. Budig Theater.