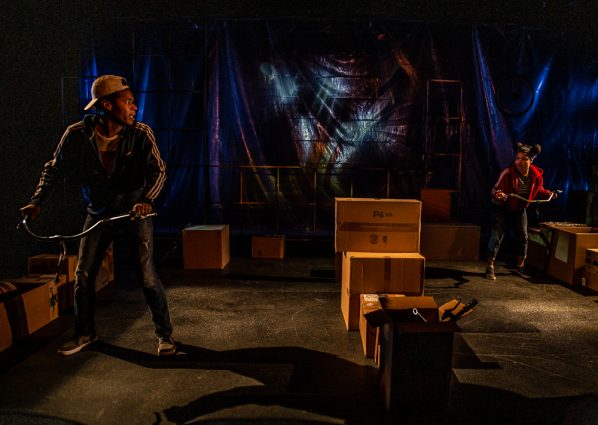 Cultural values change over time. That, in itself, is not a bad thing. Look no further than the absence of institutionalized slavery or Jim Crow laws in America for proof of that. But not all…

Cultural values change over time. That, in itself, is not a bad thing. Look no further than the absence of institutionalized slavery or Jim Crow laws in America for proof of that. But not all progress is positive. Sometimes, progress can shift our values away from people, toward wealth and materialism. When that happens, what do we lose? Who gets left behind? Those are the questions at the heart of “Red Bike,” on stage now at Know Theatre of Cincinnati. But it’s up to you to find the answers.

“Red Bike” features two unnamed protagonists (A and M, according to the program). The two fill several roles, but are mainly naive 11-year-old children in an unnamed, failing town. They drift aimlessly through a hot (“It never used to get this hot,” their parents say) day full of the sense of adventure and terror that 11-year-old children tend to apply to the world around them. They drop hints at the state of things they don’t understand: a conversation with a bus driver who has seen communities collapse before, reminders of the nine or ten jobs their parents work, the constant buzz of drones overhead. Through it all, they focus on a shiny new red bike, which seems to bring both joy and a paranoid jealousy with its presence.

Their narration is fragmented, perhaps mimicking the fluctuating attention span of adolescence. Nothing about “Red Bike” is given freely to the audience. It’s a production that asks its audience to explore and unearth meaning. Recurring characters and narrative arcs drop hints, but don’t expect playwright Caridad Svich to hold your hand through your experience.

Maliya Gramata-Jones and Montez O. Jenkins-Copeland deftly maneuver their way through what is surely a challenging script. Together with Holly L. Derr’s direction, they present a note-perfect, rhythmic performance that never allows the abstract material to go off the rails. In beautiful contrast to the sometimes jarring, fractured snippets of storytelling, every movement the two actors make is planned and executed exactly as it should be.

This is a rolling world premiere, in partnership with the National New Play Network. The talented folks at Know Theatre of Cincinnati refer to themselves as Cincinnati’s Theatrical Playground. Productions like “Red Bike” are how they earned that distinction. You likely won’t see anything like it anywhere else in the region — outside of Cincy Fringe, for which the Know is also responsible. If you’re looking for something different, this is where your search ends.

“Red Bike” is on stage at the Know from now through February 2.