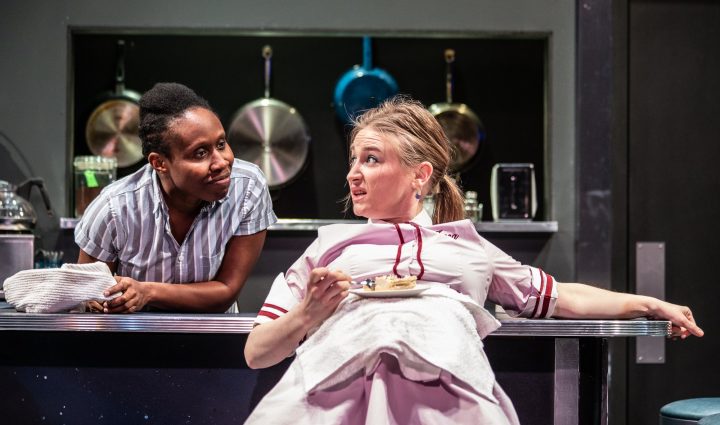 "Plenty of Light" has plenty of heart

A title like "Always Plenty of Light at the Starlight All Night Diner" tells you a lot about what kind of play you're going to see. You've got a setting, a theme, a symbol and a lengthiness…

A title like “Always Plenty of Light at the Starlight All Night Diner” tells you a lot about what kind of play you’re going to see. You’ve got a setting, a theme, a symbol and a lengthiness that suggests a healthy eccentricity. Know Theatre of Cincinnati delivers on all counts, as they usually do. A waitress and janitor are working the overnight shift at the Starlight All Night Diner. Jessa, the waitress, is pregnant and married to someone who is not up to the task. Sam, the janitor, is rough around the edges and lives in her truck. It’s almost immediately apparent that Sam is in love with Jessa, which Sam somehow thinks she’s hiding very well. Outside, a passing comet — Comet Killjoy — is creating an unnaturally bright night sky.

Enter Dr. Moxie and his graduate assistant, Danni. They come to their favorite diner like a gale, bringing notes, mysterious specimen jars and a frenetic tension that soon spreads. Killjoy, they explain, is neither passing nor a comet. It’s an asteroid that will crash into the Earth and destroy life as we know it. Luckily, they seem to have a plan — one that revolves around making a fresh pot of coffee exactly at midnight. As the clock races toward midnight, Jessa and Danni tie up the loose threads of their lives. Danni tries to reconcile with her parents, who believe her attraction to other women is a rebellious phase. Jessa calls her husband and tries to get him to at least go outside and look at Killjoy (he’s too busy with “I Love Lucy”).

Then there’s a bright light, a deafening roar, and the meat of the story begins. This play is nothing if not original. Playwright Darcy Parker Bruce makes unexpected decisions that lead to interesting, unfamiliar outcomes. She deliberately avoids common apocalyptic tropes, starting with the fact that her survivors are an old, eccentric professor, two lesbians and an expectant mother of a young girl. They have a future, but it has a likely expiration date, which actually relieves a significant amount of tension. When propagating humanity is no longer a viable option, the characters are given unprecedented freedom for self-discovery.

That freedom plays out beautifully. The cast of characters feels strangely thrown together at first, but each is perfectly suited for the situation. Dr. Moxie is taking a lifetime of research into its stunning conclusion. Danni’s failed reconciliation with her parents leaves her ready to build a new life somewhere else. Jessa is terrified of raising a baby on her own, and Sam wants nothing more than to be there for her. They just fit. And the same can be said for the actors. Michael Burnham, as Dr. Moxie, exudes a strange, soothing brilliance. Maggie Cramer’s Danni hits all the sweet spots to toe the line between awkward and charming. Lormarev Jones nails the tough-with-a-heart-of-gold persona, and her devotion to Jessa is palpable. Leah Strasser, meanwhile, brims with both confidence and vulnerability, something any parent can relate to.

I can’t do this show justice without mentioning the set design. It’s a simple enough set — a tiny diner with a bar, some stools and a window into the kitchen, with two screens for projected scenery on either side — but it’s easy to see why a scientist might pick this particular diner as the means to escape the end of the world. Above the diner, tiny crystal balls hover and amplify sometimes golden, sometimes silver light, throwing it across the walls. Spots of light glisten like stars, and spots of white paint on the bar emphasize the effect. It’s hard to nail down exactly what makes the set so special, but lucky for us, that’s just what they do at the Know. They make a place special.

“Always Plenty of Light at the Starlight All Night Diner” runs through March 16 at Know Theatre.