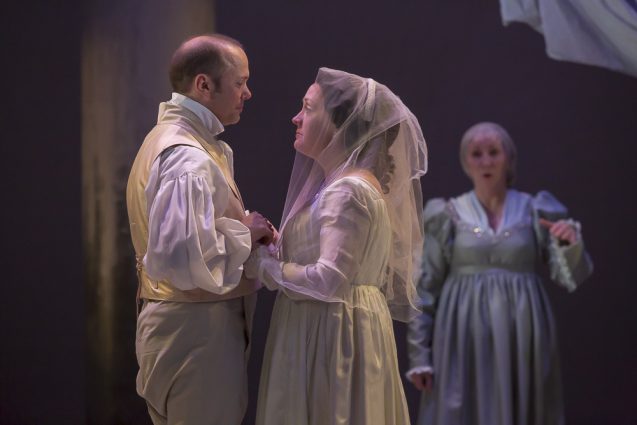 With “The Winter’s Tale,” Cincinnati Shakespeare Company has made a compelling wonder of one of the Bard’s messier works. In honor of the Company’s 25th Anniversary Season, they welcome Royal Shakespeare Company’s Christopher Luscombe as a guest director. Anchored by a stellar cast and Shannon Moore’s stunning and versatile set design, “The Winter’s Tale” is unlike anything else you’re likely to see onstage in Cincinnati this year.

“The Winter’s Tale” is one of Shakespeare’s “problem plays” which don’t neatly fit into one category — and this one is certainly full of whiplash. If the play ended at intermission (after act three) it would be seen as a complete tragedy in miniature. Misunderstandings (well, mostly just toxic male jealousy) lead to deaths, estrangements, attempted regicide, banishments and, famously, one poor soul “exit(s), pursued by a bear.”

We could call it there, but in the second half, everything goes haywire — sixteen years after we left off. Act four is a madcap pastoral woodland comedy, and the fifth act attempts to tie everything into the romance that “The Winter’s Tale” ultimately purports itself to be, although several of the “happy endings” feel more than a little hollow given the events of the first three acts. Shakespeare took plot from a contemporary romance entitled “Pandosto” and made minimal changes. With a few centuries’ hindsight, it could’ve used a bit more of his flair.

So what does Cincinnati Shakespeare Company do with this weird mess of a play? What they always do: breathe it full of glorious life. Brent Vimtrup returns to the ensemble after a two-year break as Leontes, the jealous, tyrannical King of Sicilia whose paranoia sets off the play’s dominoes. Ensemble vet Kelly Mengelkoch steals the show as his wronged wife, Queen Hermione, whose arc from joyful maternity to imprisoned desolation rings through the whole play. Regular Billy Chace delivers manic energy as peddler and con man Autolycus, and Courtney Lucien anchors much of the second half as the young princess Perdita. This production also brings some exciting new faces to the CSC stage. Utah Shakespeare mainstay Leslie Brott shines as Paulina, the play’s voice of reason. Broadway vet Marc Moritz is a joy as the Old Shepherd, whose freewheeling party serves as a setting for the pastoral fourth act.

I heard showgoers audibly gasp as they entered the Otto M. Budig Theater and first laid eyes on Shannon Moore’s set. The seven white columns and their intertwined arms stand in for royal piazzas, cathedral buttresses, and forests both friendly and treacherous. In two seasons at the new venue, I’ve seen her transform it into a Middle Eastern war zone, a Southern estate, and a mid-century Pittsburgh streetscape; this minimalist masterpiece might be my favorite of all.

One of the great joys of having a world-class Shakespeare theater in town is the ability to follow it down the strange cul-de-sacs of the Bard’s canon, which college surveys and high school English classes rarely explore. “The Winter’s Tale” is an odd, late-career conundrum of a play, and this was one of the rare times I didn’t get to reading a play prior to seeing it performed. Frankly, I’m glad I didn’t; it was better first experienced in the hands of our hometown experts.

Nat Tracey-Miller is a Cincinnati-based school librarian, musician, and cartophile whose love spans from Bowie to Beethoven to B.I.G. to Brubeck and hits every point in between. His writing has appeared in CincyMusic, Columbus Calling, Tome to the Weather Machine, Mixtape Methodology, and more. He records and performs locally with The Birds of America and ITAM.