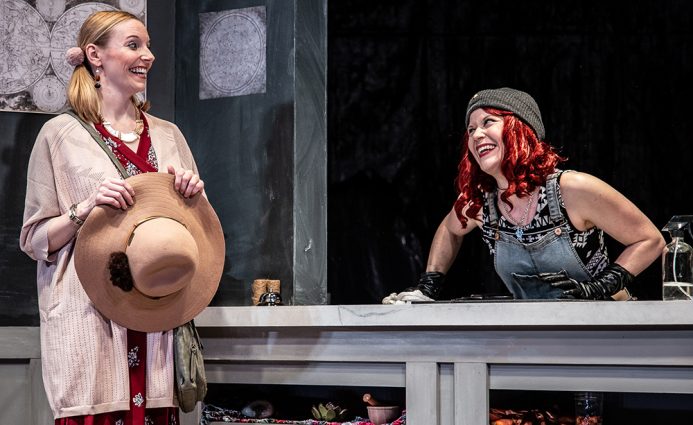 'Mercury' shows heart while reveling in the absurdly macabre

Mercury is in retrograde. That's the ultimate cause of the drama behind Steve Yockey's "Mercury," on stage now at Know Theatre of Cincinnati. If, that is, you believe Alicia (Tess Talbot), the slightly unhinged owner…

Mercury is in retrograde. That’s the ultimate cause of the drama behind Steve Yockey’s “Mercury,” on stage now at Know Theatre of Cincinnati. If, that is, you believe Alicia (Tess Talbot), the slightly unhinged owner of a curiosities shop in Portland, OR. Given what’s revealed about her and her shop throughout the play, I’d recommend taking her word for it. Or at least staying out of her way.

“Mercury” is a story of vengeance, forgiveness and who deserves which. Two plot threads converge thanks to a mysterious book purchased from the aforementioned shop. In one, a married woman named Pamela (Robyn Novak) grapples — quite poorly — with the sudden end of her affair with the equally married Heather (Elizabeth Chinn Molloy) next door. In the other, the particularly nosy Olive (Eileen Earnest), infatuated with her upstairs neighbor’s son, Nick (James Creque), deals — again, poorly — with the presence of the son’s philandering, abrasive boyfriend, Brian (Andrew Ian Adams).

Things take a surreal, frightening turn that leaves the jilted lover and philandering boyfriend in what is either hell or something equally terrifying. But something went wrong. Only one person at a time is supposed to arrive at…wherever this horrific place is. So which one deserves to go back home? And what will they have to sacrifice to get there?

Again, this is a comedy. The themes are heavy, and there is a fantastic emotional payoff, but the absurdity of the situation is not lost on any of the characters. Their reactions are priceless, but many of the laughs come from seeing deeply flawed people getting almost immediate, cosmic comeuppance for some of their more heinous actions. It doesn’t hurt that the comeuppance is delivered by manic, hungry-looking torturer-in-chief “Sam” (Patrick Earl Phillips) who wears a butcher’s apron and nothing else. There’s plenty of voyeuristic entertainment to keep you occupied throughout. But that emotional payoff is well-earned.

While this show dangles characters over a precipice for your entertainment, it also asks you piercing questions about morality. Nobody is perfect, and some are less perfect than others, but where is the line between justice and revenge? Yockey’s writing threads that line beautifully, and the cast is more than up to the challenge of bringing it to life. Tess Talbot makes a very convincing unnerving smile, and Patrick Phillips  completes a terrifying package with the effortless, almost charming way he induces fear.

Elizabeth Chinn Molloy is right on target as a suburbanite clinging desperately to the idea of normalcy, and Robyn Novak is the perfect foil, self-destructively insisting on keeping things off-kilter. Eileen Earnest has a sweetness dripping with disdain that rivals Dolores Umbridge from “Harry Potter.” Andrew Ian Adams is beautifully flippant, and I believed as soon as he was on stage that he had just had enough of this — whatever “this” might be. And James Creque, as someone being pulled in multiple directions, played a man at the end of his rope with a beautiful, understated grace.

“Mercury” hits several sweet spots. It’s a chance to see bad things happen to bad people, bad people having a shot at redemption and find a bit of self-reflection all at once. See it at the Know from now until May 11.